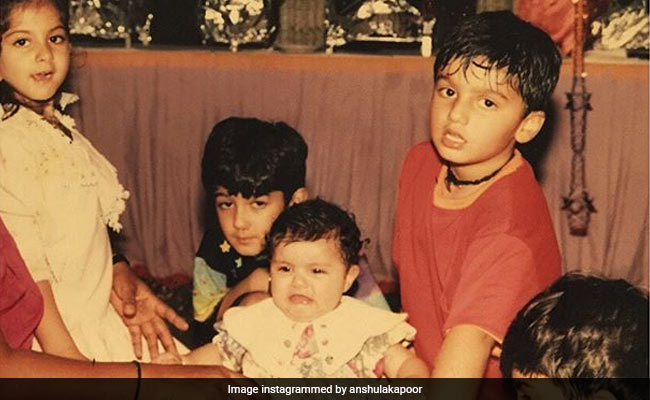 Arjun Kapoor and Anshula Kapoor, who are one of the most loved siblings of Bollywood, often share adorable throwback pictures featuring each other on Instagram. On Wednesday, Anshula made a trip down the memory lane and fished out another cute throwback photo, on which Arjun Kapoor's epic comment about his tight "kaala dhaaga" around his neck will make you ROFL. What make the throwback click priceless is that it also features Arjun's cousins Rhea Kapoor, Mohit Marwah and Akshay Marwah. In the blast from the past, Anshula can be seen sitting on a toy car with Rhea, Mohit, Arjun and Akshay (sequence wise in the picture) holding her from all side. Anshula is looking adorable even when she is crying in this picture while Arjun's expression reminded us of his 2014 film Gunday.

Sharing the picture, Anshula even cracked a joke about her expression and said that she still cries whenever Arjun Kapoor asks her to drive. LOL. "This is still my expression when Arjun Kapoor tells me I should drive hahahaha! Gotta love the 90s when we were basically a cute mess!" Anshula captioned her post and accompanied it with hashtags such as #90sKids #ThisIsProofThatIveNeverWantedToDrive. Arjun and Anshula are Boney Kapoor's children with his first wife Mona Shourie Kapoor while Janhvi and Khushi are Boney Kapoor and late actress Sridevi's daughters.

Check out the throwback picture:

This is still my expression when @arjunkapoor tells me I should drive hahahaha! Gotta love the 90s when we were all basically a cute messss! #90sKids #ThisIsProofThatIveNeverWantedToDrive

Reacting to Anshula Kapoor's post, Arjun Kapoor, Rhea Kapoor and Akshay Marwah dropped comments. The Internet is going crazy over Arjun's comment, in which he wrote: "Could that kaala dhaaga be any tighter!" Akshay, on the other hand, left an adorable comment: "Crazy! Love this picture!" Rhea simply dropped a heart emoji in the comments section.

A screenshot of Rhea and Akshay's comments on Anshula's post

Like we mentioned above, both Arjun and Anshula are big fans of throwback photos and post new ones every now and then, which many times also features their mother, who died in 2012 after battling cancer.

Time changes nothing. Love you & miss you everyday Ma. 7 years since we've felt your hugs, heard you laugh or held your hand. Already feels like eternity, but gotta keep on keepin' on, gotta make you proud everyday, gotta keep feeling your love with every heartbeat of our own #AlwaysAndForever

On the work front, Arjun Kapoor will next be seen in Panipat, which also features Kriti Sanon and Sanjay Dutt in pivotal roles.