Arjun Kapoor, Who So Serious? Uncle Sanjay Explains In Throwback Pic From His Wedding

"That's my expression when Arjun gets married," Sanjay Kapoor Instagrammed 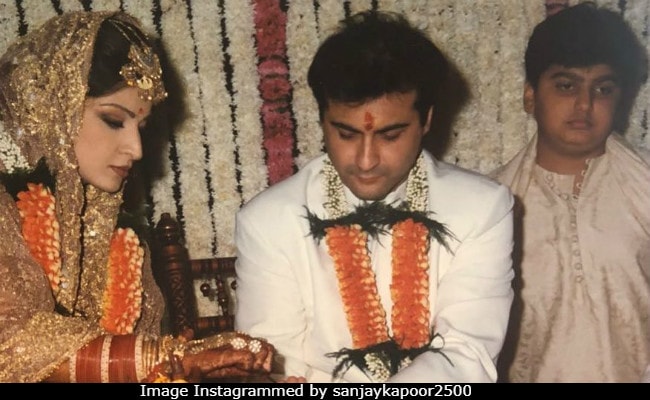 Can you spot Arjun Kapoor in this photo? (courtesy sanjaykapoor2500)

New Delhi: Arjun Kapoor featured on uncle Sanjay Kapoor's Instagram post on Saturday and guess what, it's so adorable! Sanjay jokingly trolled Arjun with the blast from the past from his wedding in 2002, in which the 32-year-old actor can be seen standing behind Sanjay and Maheep Kapoor, who are concentrating on the wedding rituals. The expression on young Arjun Kapoor's face is basically all relatives, who sit through a never-ending family wedding! In the caption of the photo, Sanjay Kapoor added he will pay back with a similar expression when Arjun gets married. "That's my expression when Arjun gets married," he wrote in the caption and added "bored" and "get it over with chachu" in hashtags.

Can you spot the 16-year-old Arjun Kapoor in this throwback photo?

That's my expression when Arjun gets married #bored #getitoverwithchachu

Earlier this week, we also got a glimpse of Arjun Kapoor as "Fubu" from when he reportedly weighed some 140 kilos. Arjun's throwback photo from before he lost 50 kilos is clearly a reminder of his fat-to-fit story.

You can't blame Sanjay Kapoor of favouritism - his Instagram feed has pieces of throwback gold, which also feature Sonam and Harshvardhan Kapoor. Here's the one starring a young Sonam from his chachu's wedding. "20 years back when we danced at my wedding Sonam, now I will be dancing at yours," he wrote during Sonam's wedding festivities.

Sanjay Kapoor posted this when he decided to "unmask" Bhavesh Joshi. "Watch the super talented Harshvardhan in Bhavesh Joshi, in theatres today," he Instagrammed on the day Bhavesh Joshi clashed with Veere Di Wedding at the box office.

Promoted
Listen to the latest songs, only on JioSaavn.com
Meanwhile, Arjun is currently in London, where he's filming Namaste England with Parineeti Chopra. Arjun was recently spotted chilling with Sonam and Rhea Kapoor in the British capital, where the actress celebrated her 33rd birthday with husband Anand Ahuja on Saturday.

Apart from Namaste England, Arjun also has films like Sandeep Aur Pinky Faraar and Panipat in the pipeline.