Another Day, Another Stunning Pic Of Shweta Bachchan Nanda And Daughter Navya Naveli 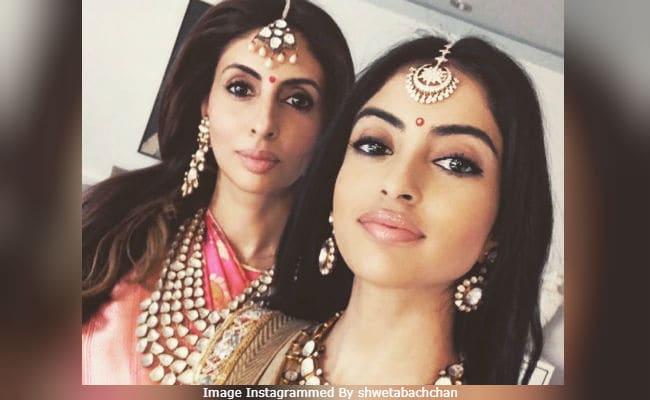 Shweta Bachchan Nanda delighted us with yet another beautiful picture of herself and daughter Navya Naveli from Isha Ambani's wedding. The picture appears to be taken just after the mother-daughter duo got ready for Isha's wedding to Anand Piramal on Wednesday in Mumbai. "Ice'd," Shweta captioned the photo. For the big fat wedding, Shweta and Navya were accompanied by Amitabh Bachchan and Jaya Bachchan while Aishwarya, Abhishek and Aaradhya arrived later. Shweta opted for a pink sari while Navya Naveli wore a beige sari. They accessorised their outfits with kundan jewellery. On Wednesday, Shweta treated us to some fabulous set of family pictures too, but first, take a look at her selfie with Navya here:

For the wedding, Jaya Bachchan opted for a cream sari with a stunning necklace while Big B wore a white kurta pyjama set. "Mine," read Shweta's caption for this picture with parents Amitabh and Jaya Bachchan and Navya.

Here's one picture of Big B, Jaya Bachchan and Navya from inside the wedding.

ICYMI, a close shot of Navya.

Meanwhile, Aishwarya Rai Bachchan added stardust to Isha and Anand's wedding in a red sari by Sabyasachi. Abhishek Bachchan looked dapper in a black bandhgala and Aaradhya wore an orange and red lehenga.

How cute is Aaradhya?

In one tweet on Thursday, Amitabh Bachchan shared the pictures posted by Shweta and Aishwarya from the wedding and wrote, "Family togetherness is the bond that defies all else... not that there ever is an else... but if there were... it would never stand the test of a family standing together."

T 3024 - Family togetherness is the bond that defies all else .. not that there ever is an else .. but if there were .. it would never stand the test of a family standing together pic.twitter.com/fPmjB38Zvk

Thank you, Shweta and Aishwarya for the pictures!