Angrezi Medium: The film's trailer will release on Thursday 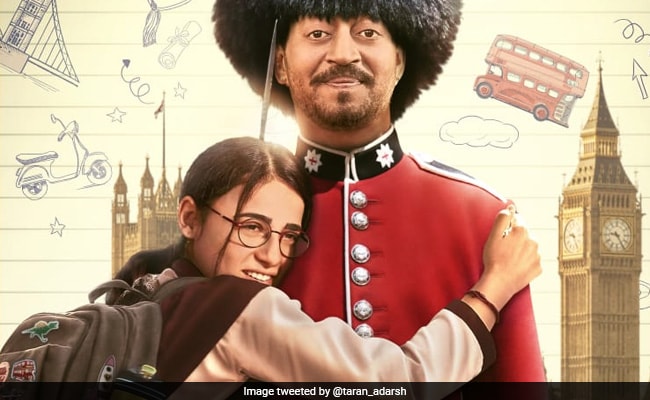 The first poster of Angrezi Medium dropped on the Internet on Wednesday and we are sure that Irrfan Khan and Radhika Madan's never-seen-before looks will leave you wanting more. Along with the poster, the makers have also revealed that they will release the film's trailer on Thursday (more on that later). In the picture, Irrfan Khan can be seen dressed as a Queen's guard and Radhika Madan, dressed in a school uniform, can be seen hugging him. Other than Irrfan and Radhika, Angrezi Medium also stars Kareena Kapoor, Dimple Kapadia, Ranvir Shorey, Kiku Sharda and Deepak Dobriyal in pivotal roles. The film is a sequel to the 2017 comedy Hindi Medium, which featured Irrfan in the lead role.

Take a look at the first poster of Angrezi Medium here:

Angrezi Medium marks Irrfan Khan's first film after his cancer treatment. In a special video message for his fans, the actor, who is still recovering from the disease, talked about his health issues and revealed that he wants to promote the film personally but can't because of the "unwanted guests" resting in his body. He then went on to talk about the film and said: "Mujhe umeed hai ki yeh film aapko sikhaegi, hasaegi, rulaegi, fir hasaegi shayad (I hope this film will teach you, will make you laugh, make you cry and then, maybe again, make you laugh). Enjoy the trailer and be kind to each other." The clip comprises several stills from the film with Irrfan's voice in the background.

Irrfan Khan was diagnosed with a neuroendocrine tumour in March 2018. He left for London in the same month for the treatment but returned to India in February 2019. During his brief visit, Irrfan filmed Angrezi Medium. A couple of months later, he flew into London again to continue the treatment. Irrfan Khan returned to India after his surgery in September last year.

Directed by Homi Adajania, Angrezi Medium will open in theatres on March 20.