Ananya Panday On What She Would Like To "Swap" With BFF Suhana Khan, Nepotism Debate And "Biggest Competition"

"I would like to learn her dancing and acting skills," Ananya Panday on Suhana Khan 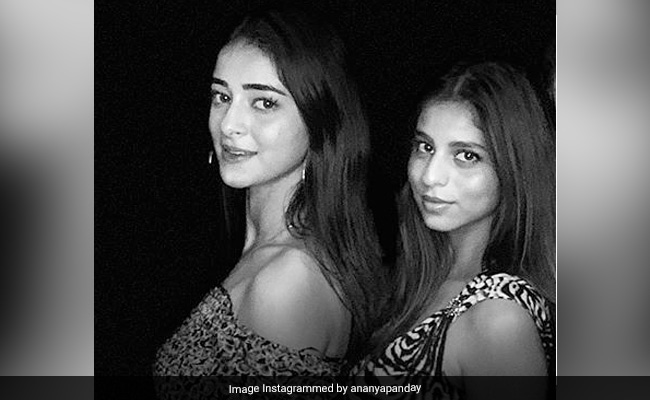 Ananya Panday opened up about her stance on the nepotism debate, her rapport with BFF Suhana Khan and her first ever audition on an episode of Zee Cafe's talk show Starry Nights GEN Y, reported news agency IANS. Talking about the one thing she wouldn't mind swapping with Suhana and things that she would like to learn from her, the Student Of The Year 2 actress said: "I would like to learn her dancing and acting skills, and would love to swap my closet". In previous interviews, Ananya is always known to have raved about Suhana's acting skills. Shah Rukh Khan's daughter Suhana and Chunky Panday's daughter Ananya went to Mumbai's Dhirubhai Ambani International School together. Sanjay Kapoor's daughter Shanaya completes their BFF trio. Suhana currently studies film at New York's Columbia University.

Meanwhile, here's what Ananya said about her competition in Bollywood: "Janhvi Kapoor is my biggest competition in this film industry." Ananya made her Bollywood debut with Student Of The Year 2 in May 2019 while Janhvi stepped into Bollywood with Dhadak in July 2018.

Did you know Ananya Panday had auditioned for the Indian production of Disney's Aladdin? "I remember when Aladdin had come to India, there were a bunch of people who auditioned. We had to record a video, which I did on my phone. I had worn this red outfit and had to read the dialogues for Jasmine. The scene went really well, but then they also asked us to sing and I can't sing to even save my life. So I really got rejected," IANS quoted Ananya as saying.

The 21-year-old actress also opened up about her comments on nepotism on Rajeev Masand's talk show The Newcomers Roundtable 2019 and said: "I still agree that we have an advantage and we get to meet people. We have easier access to people from the industry as we have grown up around them. But now that I've got that chance, it's unfair for me to waste it. I want to make my father proud."

"There are so many examples of such talented people who have not come from the film background like Ranveer Singh and Anushka Sharma and then there are actors like Ranbir Kapoor and Alia Bhatt who have come from film families and done so well. So, it all comes down to the audience," she added.

Last year, Ananya featured in headlines for equating "struggle" in Bollywood with getting a Dharma movie or an appearance on Koffee With Karan. Siddhant Chaturvedi's response to Ananya's comments was the Internet's favourite: "Everybody has their own struggle. The difference is where our dreams come true, their struggle begins."