Ananya Panday said, "Suhana used to be the lead and I... this thing moving in the background." 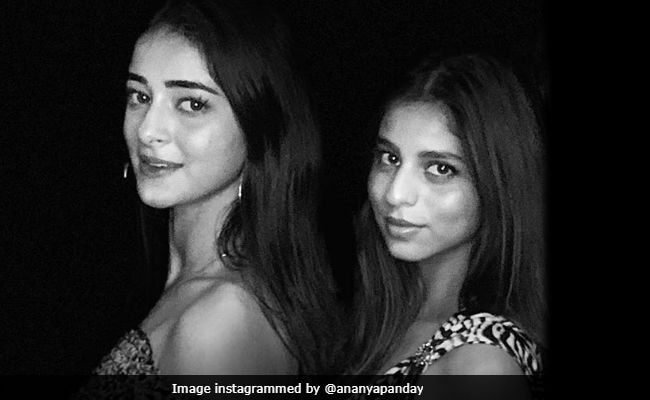 Ananya Panday, who is awaiting the release of her second Bollywood film Pati Patni Aur Woh, said that when she was in school with Suhana Khan (daughter of Shah Rukh and Gauri Khan), the latter got "main lead roles" in plays while she "used to be this thing moving in the background," reports mid-day. During an event to promote her upcoming film, Ananya said that Suhana is a "brilliant actor" and "too talented." The 21-year-old actress said, "Suhana and I were in the same school together. We used to be in all the school plays and she used to be the main lead and I used to be this thing moving in the background. This is really cool because I think she is a brilliant actor. Suhana is just too talented...She is a great singer and a great dancer. A lot of big things are meant for Suhana."

Shah Rukh Khan's daughter Suhana is currently studying acting in New York and she recently made her acting debut of sorts in a 10-minute short film, titled The Grey Part Of Blue. The film focusses on the relationship of a young couple during a two-day road trip. The Grey Part Of Blue, directed by Theodore Gimeno, trended big time when it released on the Internet earlier this month.

You can watch The Grey Part Of Blue here:

In addition, Suhana Khan has featured in several plays while she was styuding abrad, clippings of which frequently made its way on the Internet. In fact, in 2017, after watching a viral clip of Suhana in a play, National Award-winning actress Shabana Azmi vouched for her and tweeted, "Mark my words Suhana Khan is going to be a seriously good actor. I've watched a short clip of her acting and it was terrific. Bless her." Overwhelmed, Shah Rukh had then replied, "How sweet are you to say that. And of course, when you say it, then it's big encouragement for the little one. Thanks."

On the work front, Shah Rukh Khan recently announced his next production venture Bob Biswas, featuring Abhishek Bachchan in the lead role. The actor is expected to announce his next film soon.