Ananya Panday On Besties Suhana Khan And Shanaya Kapoor: 'We Can Count On Each Other During Our Lows'

"Whenever trolling or bullying happens, we three have each other's back," said Ananya 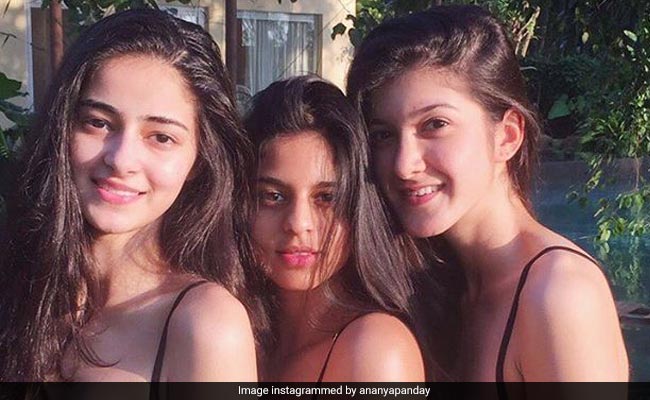 Ananya Panday, who was recently trolled on social media for a minor spelling error, says that in times like this, she can count on her besties Suhana Khan and Shanaya Kapoor, reported Asian Age. Chunky Panday's daughter Ananya, Shah Rukh Khan's daughter Suhana and Sanjay Kapoor's daughter Shanaya are childhood friends and the trio are spotted together on several occasions. In an interview with the publication, Ananya said that during her darker days, Suhana and Shanaya stood strong beside her and supported her in every situation. "Suhana, Shanaya and I have grown up together and are practically of the same age. So whenever trolling or bullying happens, we three have each other's back. We can count on each other during our lows. I am lucky because they are always with me no matter what," the 20-year-old actress told Asian Age.

Further in her interview, when Ananya was asked how much trolls affect her, she said: "There is a negative side of comparison and trolling, but there are so many positive aspects to it and I just want to focus on that."

Ananya Panday, who is just one-film-old, has been at the receiving end of social media trolls on several occasions. Recently, she was trolled for a spelling mistake in her "Charlie's Angels" post on Twitter. Sharing a picture, in which Ananya could be seen posing with Suhana and Shanaya, the Student Of The Year 2 actress wrote: "Charlie's Angles" instead of "Charlie's Angels." However, Ananya did correct herself and repost the picture - but trolls had spotted her mistake by then. One troll called her a 'graduate from nepotism school" while another labeled her tweet as "Tweet of the year."

And here are the tweets, where the trolls included her error:

This is the deleted Tweet from student of the year.

intelligent #AnanyaPanday while everyone is busy with the match she silently retweeted it literally it took 3 freaking hours to realise her mistake. that's how it'll be when u r a NEPOTISM SCHOOL graduate#INDvNZ#CWCUP2019#CWC19pic.twitter.com/ft20p80yPg

Previously, Ananya was also publicly called out on social media by her former schoolmates for claiming she had been accepted into universities abroad when she allegedly hadn't. Soon after, Ananya took a step against cyber bullying and launched an anti-bullying initiative called 'So Positive.' Speaking about the programme, Ananya told Asian Age: "I feel like everyone is experiencing the bullying and trolling, but no one is speaking anything about it. I was also confused for a long time because I didn't know exactly what I could do about it. So I had a word with my parents and my team, and thought that just starting a conversation would be a big step."

Here's the video, in which Ananya talked about the circumstances that led her to start the initiative.

A part of growing up is taking responsibility & as a woke Millennial I, Ananya Panday introduce y'all to my Digital Social Responsibility initiative 'So+' @sopositivedsr . . #SoPositive #SocialForGood

And here's Ananya's post on the allegations that she lied about getting into universities:

I didn't want to do this. I didn't feel like I needed to explain myself to anyone, but the rumours that I faked my admission at USC have been doing the rounds for a while now. They've been getting out of hand, and it's even more unfair and sad that my family and friends have to go through this. As I've stated earlier, I was accepted by Annenberg School for Communication and Journalism at USC for a major in Communication in the Spring 2018 semester. But since I was shooting for my first film and the release date later got pushed, I had to request for a deferral (which means postponing my admission) twice - first to Fall 2018 and later to Fall 2019, both of which they gracefully agreed to do. In my case, I could only defer my admission two times so I will not be attending university (for now), since I've decided to pursue my career in acting. As for the people who have been trying to pull me down with these accusations, I would like to send you all lots of love, peace and positivity. And would also like to say that even though they're claiming to be my classmates (nameless and faceless) - I'm sure they aren't because I've grown up with the people I went to school with and they would never do something like that. It's never okay to bully anyone - creating fake conversations, stories and screenshots is very dangerous and can seriously damage people's lives. So please be loving, positive and kind. (PS - my father's real name is Suyash and I blurred out my address for security reasons)