Shanaya Kapoor Will Explain Her "Purple Devil Emoji" Mood. But First, Let Her Take A Selfie

Shanaya Kapoor’s post is a lesson in mirror selfies 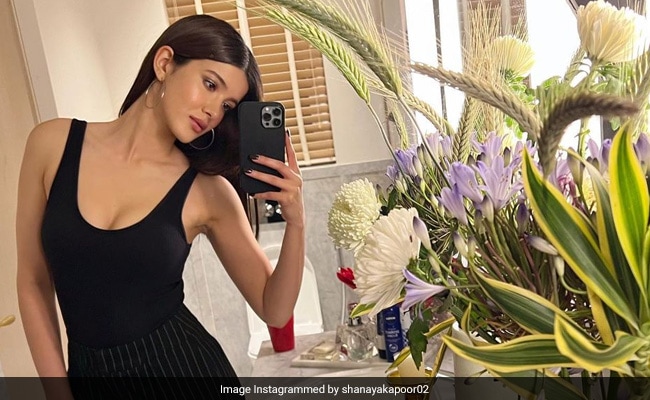 Shanaya Kapoor may have not made her acting debut yet but if her social media presence is anything to go by, all eyes are on this young talent. And, she does not disappoint. Shanaya Kapoor, on Tuesday, shared a bunch of mirror selfies dressed head to toe in black. In a pair of straight pants, top and dewy makeup, the upcoming actress looks lovely and her fans made it a point to tell her this in the comments section. And, to top it all, she added a cheeky caption that said, “Purple devil emoji was my mood for the night.”

Shanaya Kapoor's BFF, actress Ananya Panday latched onto the caption immediately and commented with a hint of mischief: “Ya, I wonder why.” To this, Shanaya Kapoor said, “You are being a bit too free and funky.” Soon enough, Ananya Panday replied, “You too,” with the very same purple devil emoji. Well, this is one inside joke we would love to eavesdrop on.

Shanaya Kapoor's Instagram followers are no strangers to stunning pictures of her. A few days ago, she dropped a dazzling photo of herself smiling for the camera, with a little white smiley face drawn on her shoulder. Her caption reads, “Say (cheese emoji),” followed by a bunch of happy face emojis.

And before that, Shanaya Kapoor shared a selfie, flaunting her makeup-free face. In the caption, she wrote, “Yes I am pretending to look at something for the selfie, hehe.”

On another occasion, Shanaya Kapoor showed off her “messy hair” and wrote, “I know my hair is looking a bit too messy but hiii.”

Shanaya Kapoor is the daughter of actor Sanjay Kapoor and Maheep Kapoor. Her uncle Anil Kapoor, and cousins Sonam Kapoor, Arjun Kapoor and Harsh Varrdhan Kapoor are actors. Shanaya Kapoor is set to make her Bollywood debut with a film backed by Karan Johar's Dharma Productions. The shooting for the film began in 2021.