Amitabh Bachchan was accompanied by his wife Jaya Bachchan and son Abhishek Bachchan at the ceremony.

Amitabh Bachchan received the award at the Rashtrapati Bhavan.

The 50th Dadasaheb Phalke Awards honoured legendary actor Amitabh Bachchan with India's highest film honour - for his stupendous contribution to Indian cinema, in New Delhi on Sunday evening. President Ram Nath Kovind presented the Award to Mr Bachchan. The actor was accompanied by wife Jaya Bachchan and son Abhishek Bachchan at the ceremony. The 77-year-old actor, who skipped this year's National Film Awards ceremony due to health issues, received the award from President Ram Nath Kovind at the Rashtrapati Bhavan. After receiving the award, Amitabh Bachchan said, “When this award was announced, a doubt arose in my mind: if this is an indication for me to sit at home and relax after working for so many years? There is some more work I have to finish and certain possibilities are coming up where I may get a chance to do some work." 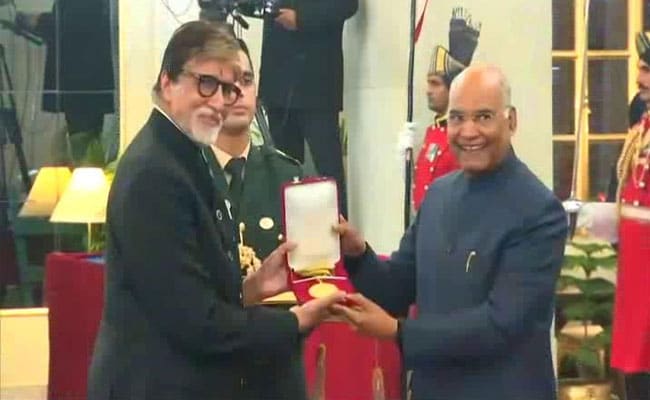 In September, this year, Union Minister Prakash Javadekar announced that Mr Bachchan will be awarded with the prestigious award. "The legend Amitabh Bachchan who entertained and inspired for 2 generations has been selected unanimously for Dadasahab Phalke Award. The entire country and international community is happy. My heartiest Congratulations to him," Prakash Javadekar tweeted.

The legend Amitabh Bachchan who entertained and inspired for 2 generations has been selected unanimously for #DadaSahabPhalke award. The entire country and international community is happy. My heartiest Congratulations to him.@narendramodi@SrBachchanpic.twitter.com/obzObHsbLk

In his tweet, 77-year-old actor stated that he could not attend the National Award ceremony because he was "down with fever" and that he was not allowed to travel. "Down with fever... Not allowed to travel. Will not be able to attend National Award tomorrow in Delhi. So unfortunate, my regrets," Big B tweeted. The 66th National awards were presented to the winners by Vice President of India Venkaiah Naidu last week.

Amitabh Bachchan has won four National Film Awards for Best Actor through his illustrious career, last winning it for his performance in 2015 film Piku. Big B was last seen as a host on the TV quiz show Kaun Banega Crorepati 11. Badla, co-starring Taapsee Pannu, remains his last release. The actor has films like Gulabo Sitabo, Chehre and Jhund, in the pipeline.