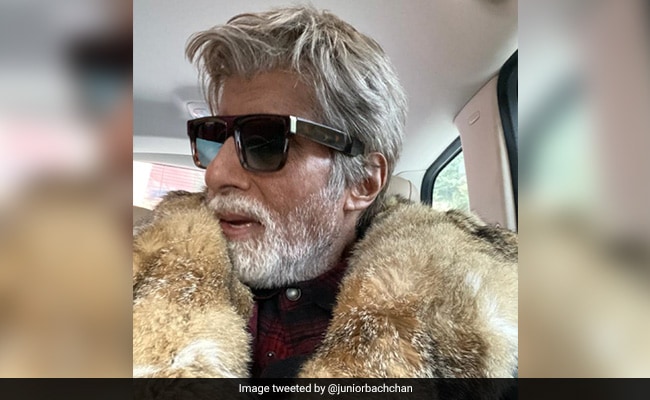 Amitabh Bachchan is currently touring Europe for the shooting schedule of Chehre and it appears that his son Abhishek Bachchan is very much missing him back home in Mumbai. Abhishek, who never forgets to share his Monday Motivation mantra at the beginning of the week, simply tweeted a photo of Amitabh Bachchan with the hashtag "#MondayMotivation", tagging the 77-year-old megastar. In the photo, Amitabh Bachchan, who wrote about shooting in sub-zero temperatures recently, can be seen geared up in winter wear to battle the cold. The kala chashma adds to Big B's rough and tough look, right?

Earlier in November, Abhishek Bachchan paid a tribute of sorts to Big B to celebrate his 50 years as an actor:

Not just as a son, but as an actor and a fan... We are all blessed to witness greatness! There is so much to admire, to learn and even more to appreciate. Several generations of cinema lovers get to say we lived in the times of BACHCHAN!!! Congratulations Pa on completing 50 years in the Film industry. We now await the next 50! Love you. #50yrsofSaatHindustaani #50yrsofBachchan #GiveItUpForBachchan

On February 15, the day when Amitabh Bachchan had signed his first film Saat Hindustani 50 years ago, Abhishek wrote: "The coolest thing he taught me today... As I went, in the morning to wish him for completing 50 years of being an actor and to tell him that I was leaving for work- I asked him where he was all ready to go to? He said... To work!"

ICON! To me, he's so much more. My father, best friend, guide, best critic, greatest support, idol..... HERO! 50 years today he started his journey in films. Even today, his passion and love for his craft and work is the same as I'm sure it was on the first day. Dearest Pa, today we celebrate you, your talent, your passion, your brilliance and your immense influence. Can't wait to see what you have in store for the next 50 years. The coolest thing he taught me today.... As I went, in the morning to wish him for completing 50 years of being an actor and to tell him that I was leaving for work- I asked him where he was all ready to go to? He said..... To work! . . . . #50yrsofBigB #amitabhbachchan #BigB

Amitabh Bachchan recently wrapped the Slovakian schedule of Chehre and headed to the next spot Poland, from where he posted this emotional tweet in memory of his father Harivansh Rai Bachchan. Big B co-stars with Emraan Hashmi in Chehre, which is being directed by Rumi Jaffery.

T 3581 - At one of the oldest Churches in Europe , in Poland a prayer for Babuji .. so touched and such an emotional moment .. his soul must be at peace and love ..
Thank you Bishop and the people of Poland .. such an honour pic.twitter.com/dkcjUpEEN0