Amitabh Bachchan Thinks He Was A "Failure" At Replicating Michael Jackson

"When Manmohan Desai thought that I could replicate MJ in our film Gangaa Jamunaa Saraswathi," wrote Amitabh Bachchan 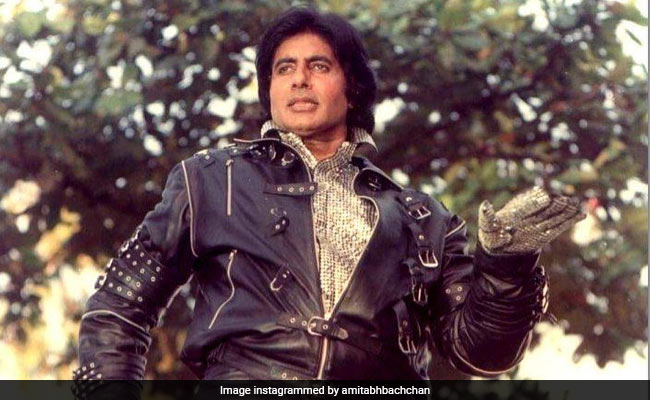 Amitabh Bachchan's versatility needs no introduction. Be it pulling off the most difficult of characters with utmost ease or hosting quiz shows for the longest time. However, if there is one thing that the actor is not very confident about and by his own admission, thinks he was a "failure" at - was replicating legend Michael Jackson. Amitabh Bachchan, who loves to share trivia about his old films, shared a throwback picture on his Instagram profile on Tuesday. He posted a picture from the sets of the 1988 film Gangaa Jamunaa Saraswathi. In the photograph, Big B can be seen dressed in Michael Jackson's signature style - a moto jacket, matching pants with studs on it, a sequined shirt and matching gloves. Big B captioned the post: "When Manmohan Desai thought that I could replicate MJ in our film Gangaa Jamunaa Saraswathi. What a failure I was."

Amitabh Bachchan and Manmohan Desai was a duo that made many super hit films together including Gangaa Jamunaa Saraswathi. Some of the other hits were Coolie, Mard, Parvarish, Amar Akbar Anthony and Naseeb.

Amitabh Bachchan is currently seen hosting the TV quiz show Kaun Banega Crorepati 12. In terms of films, the actor was last seen in Shoojit Sircar's Gulabo Sitabo, co-starring Ayushmann Khurrana. The film released on Amazon Prime Video in June and it opened to largely positive reviews. The actor's upcoming projects include Ayan Mukerji's Brahmastra<, co-starring Alia Bhatt and Ranbir Kapoor, and Chehre, alongside Emraan Hashmi. He will also be seen in the sports drama Jhund. He also signed a film called Mayday, which will be directed by Ajay Devgn and it will star Rakul Preet Singh.