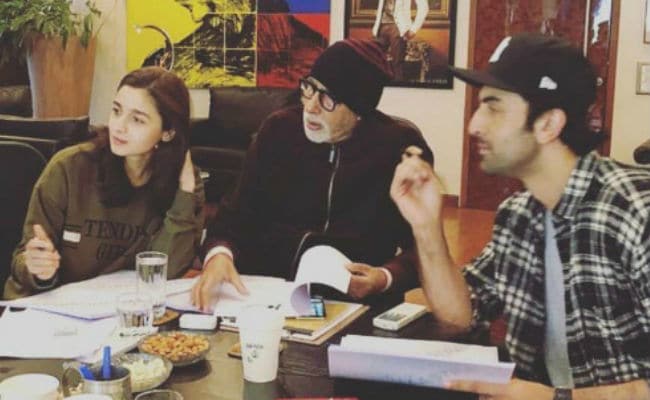 Amitabh Bachchan, Alia Bhatt and Ranbir Kapoor during a preparatory session for Brahmastra

"We took years and years and are still trying to fine-tune our craft but these people, they come first day on the set and know exactly what they are doing. They are so confident, mature," Mr Bachchan added, reports PTI.

Amitabh Bachchan said that he considers himself lucky to have worked with the different generations of actors. "I am fortunate that I've been able to live through the period where I saw Meena (Kumari) ji, Nutan ji, Waheeda (Rehman) ji and now I'm getting an opportunity to work with actors like Alia and Ranbir... It's just unbelievable," he was quoted as saying.

It's is not uncommon of Amitabh Bachchan to send flowers along with a note of appreciation to the actors whose work impresses him. Actor Ranveer Singh and Deepika Padukone received one each after "Padmaavat" while Kriti Sanon and Rajkummar Rao got her note after she featured in Bareilly Ki Barfi. Speaking about sending the appreciation notes, Big B said: "I get so obsessed that I write to them and send flowers when I watch their performance."