Amitabh Bachchan And Granddaughter Navya Naveli In A Pic. Need We Say More?

What's not to love about this picture? 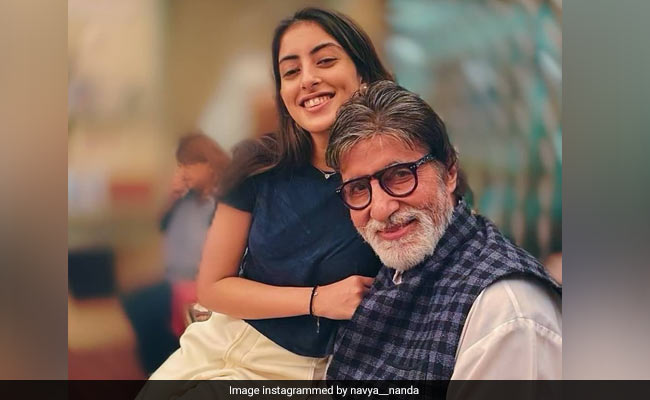 The Internet dug up a picture perfect moment featuring Bollywood veteran  Amitabh Bachchan and his granddaughter Navya Naveli Nanda. A fan page dedicated to Navya shared this happy picture, in which the duo can be seen posing together. "Junior and senior," read the caption on her post. Fans of Big B showed some love in the form of comments on the Instagram post. "Love you both," read a comment. "Excellent," added another Instagram user. Chain of red heart emojis were a recurring phenomenon in the comments section of the post and it is easy to see why. Without much ado, see the picture:

The actor's upcoming projects include Ayan Mukerji's Brahmastra, co-starring Alia Bhatt and Ranbir Kapoor, and Chehre, alongside Emraan Hashmi. He will also be seen in the sports drama Jhund. Last year, Big B signed a film called Mayday, which will be directed by Ajay Devgn and it will star Rakul Preet Singh.

Navya Naveli Nanda, daughter of Shweta Bachchan and Nikhil Nanda, is a graduate from New York's Fordham University. She is the co-owner of the Aara Health, an online platform which discusses health issues.