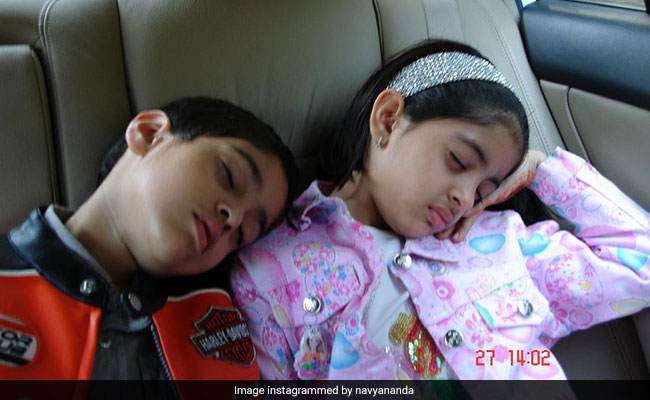 Adorable is how we would like to describe this throwback picture of Navya Naveli and her brother Agastya Nanda. On Sunday night, Navya posted a super cute picture of herself along with her brother. In the picture, the brother-sister duo can be seen enjoying their nap time, seated in a car. As revealed by Navya in her caption, the picture happens to be a memory from the year 2000, when both Navya and Agastya were kids. "Partners since 2000," Navya Nanda captioned the post. The post received a lot of love from Neetu Kapoor and Maheep Kapoor, who dropped heart emojis. Armaan Jain commented, "Aww my bachchaaaas"

Both Agastya and Navya Naveli made their Instagram profiles public last year and they often make appearances on each other's social media accounts. See some of their posts here:

Navya Nanda, who has been friends with Suhana Khan, Ananya Panday and Shanaya Kapoor for the longest time, shared a throwback picture with them along with a recent click. She added the caption: "How it started vs How it's going!"