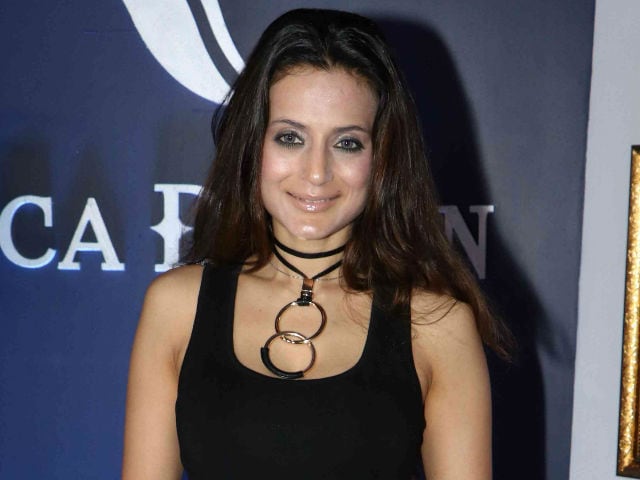 Ameesha Patel photographed at an event in Mumbai.

New Delhi: Actress Ameesha Patel, who got a bumper start in Bollywood with 2000 hit film Kaho Naa... Pyaar Hai, says a sequel would be incomplete without her. But the probability of Kaho Naa... Pyaar Hai 2 wasn't the only thing she was talking about. In an interview with news agency IANS, the 40-year-old actress appeared to make a rather snide comment about newcomer Pooja Hedge, who debuted opposite Ameesha's Kaho Naa hero Hrithik Roshan in Mohenjo Daro on August 12.

"Of course I want a sequel to Kaho Naa... Pyaar Hai. But more than me people want Hrithik and me to come together for a film. My social media pages are flooded with messages for Hrithik, Rakesh Roshan and Filmkraft Productions, like 'Please make Kaho Naa... Pyaar Hai'," Ameesha said in the interview.

Now, she could have stopped there, but didn't. Ameesha added: "Even now, for the promotions of Mohenjo Daro, Pooja Hegde's Dubsmashed a song from my film and Hrithik too sort of promoted Kaho Naa... Pyaar Hai. I'm sorry that Mohenjo Daro didn't do well, and the plan was to come with a newcomer, but every film cannot achieve the same success as Kaho Naa... Pyaar Hai."

Some would say Ameesha's career choices failed to capitalise on the start Kaho Naa gave her. Apart from a handful of films like Gadar and Humraaz, Ameesha Patel has largely been ignored by the public. However, she remains convinced of her own appeal.

Promoted
Listen to the latest songs, only on JioSaavn.com
"The love audience has for me and Hrithik, if there were a Kaho Naa... Pyaar Hai 2, the film will get a bumper opening only, for sure. Kaho Naa... Pyaar Hai sequel, just like Gadar 2, is incomplete without me," said Ameesha in the video shared by IANS.

After Kaho Naa... Pyaar Hai and Gadar, Ameesha Patel had supporting roles in Bhool Bhulaiyaa and the Race series. Several other films she appeared in were flops - Yeh Hai Jalwa, Vaada, Elaan and even Aap Mujhe Achche Lagne Lage with Hrithik Roshan.