'All My Films Should Be Banned,' Says Twinkle Khanna - The Only One Who Can Actually Say It

Twinkle Khanna was speaking at her book launch 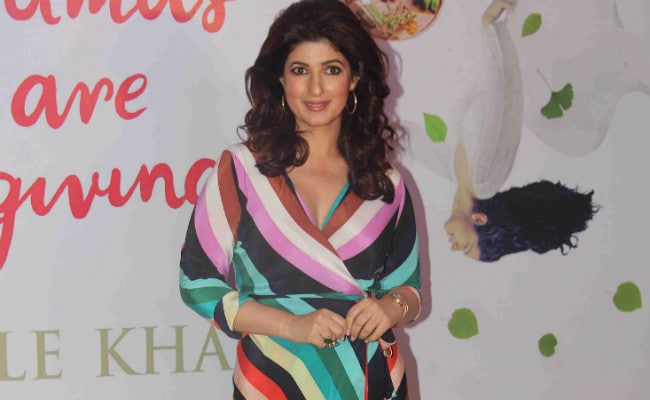 Twinkle Khanna at the launch of Pyjamas Are Forgiving

Twinkle Khanna, who ditched her career as an actress many years ago after an uneventful journey in Bollywood, is a best-selling author and just launched her new book Pyjamas Are Forgiving on Friday. Which means, Twinkle must have delivered several typically Twinkle statements and what she said about her films is just one such. News agency IANS reported that when Twinkle was asked if her films should be remade, she said: "I haven't given a single hit in fact. I think that all my films should be banned so that no one can watch it." Twinkle quit movies after she married Akshay Kumar in 2001 and was last seen in Love Ke Liye Kuch Bhi Karega.

Twinkle Khanna, who is now a columnist, an author, an interior designer, Twitter humourist and also a producer, has often referenced her unexciting tryst with Bollywood and into many of her self-directed jokes. In 2016, she tweeted to notify she's not returning to her "legendary acting skills," and also told NDTV at some point: "I have no acting skills! You need acting skills to act, not intelligence." Only recently Akshay had a hilarious response to his actress-turned-author wife's career choices and said in an interview: "...Looking at the 14 films what she has done, writing has been her best decision."

Like I don't have enough trolls lurking around in the outside world :) https://t.co/fxy0dXRnnX

Twinkle made her debut in Bollywood with 1995's Barsaat and went on to star in films like Mela, Dil Tera Diwana, Jaan, Joru Ka Ghulam and Jab Pyaar Kisise Hota Hai, all of which received a cold response at the box office. Her films with Akshay Kumar - Zulmi and International Khiladi - also failed to impress the audience and Twinkle took the cue just in time to make her exit: "I was desperate to get out. My entire body was outside the door, I was just hanging on with my toes," she told NDTV.

Pyjamas Are Forgiving marks the 43-year-old author's third book, at the launch of which she was joined by husband Akshay Kumar, mother Dimple Kapadia, Ranveer Singh, Sonam Kapoor, Bobby Deol and others. About her new book, this is what she told IANS: "This is my third book and I guess when I look at everything that I do, it's always about women finding their place in the world. To me, what I personally find interesting is that, here is a woman who is interested in finding redemption and not finding a man. It also has an interesting premise because it's in stringent Ayurvedic retreat and in a confined environment like the Bigg Boss as when you are in a closed place, all the emotions run high and that was interesting for me."