At the Filmfare award, in her acceptance speech Alia Bhatt had said: "Tonight is all about love, there, my special one, I love you, Ranbir" 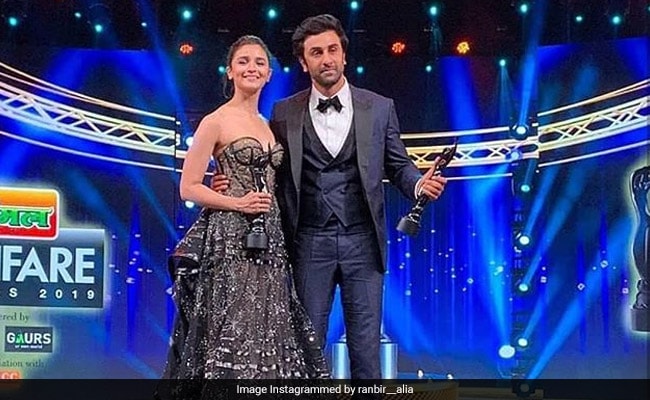 Alia Bhatt and Ranbir Kapoor trended on again and off again during the Bollywood awards season for their PDA and mushy speeches, speaking of which Alia Bhatt told Mumbai Mirror that she won't "defend" any of it as it was "very personal." At the Filmfare Awards, when Alia Bhatt accepted the Best Actress trophy she said: "Tonight is all about love, there, my special one (pointing towards Ranbir Kapoor in the audience), I love you, Ranbir." When asked if that was her 'official announcement,' the actress said: "That was not an announcement. And I don't need to defend what I did because it was very personal."

Soon after the Zee Cine Awards was aired on television, fan clubs shared a video of Alia and Ranbir's adorably uncoordinated kiss after her name was announced as the winner of Best Actress (Viewer's Choice) for Raazi. At the same event, Alia could not hold back her tears when Ranbir Kapoor talked about his father Rishi Kapoor during his acceptance speech.

Several such videos and photos went viral along with reports of an impending wedding. Multiple websites reported that Alia Bhatt and Ranbir Kapoor are set to marry after Rishi Kapoor returns from the US post his treatment for an undisclosed ailment. Alia's mother Soni Razdan was about the reported wedding at a media event, she said: "She is too young to rush into any lifetime decision," reports IANS.

When asked about her mother's words of "caution," Alia Bhatt told Mumbai Mirror: "I don't know in what context she said it so it's difficult to comment."

As of now, Alia Bhatt is looking forward to the release of Kalank on April 17 while she's filming Brahmastra with Ranbir Kapoor, which is expected to release later this year.