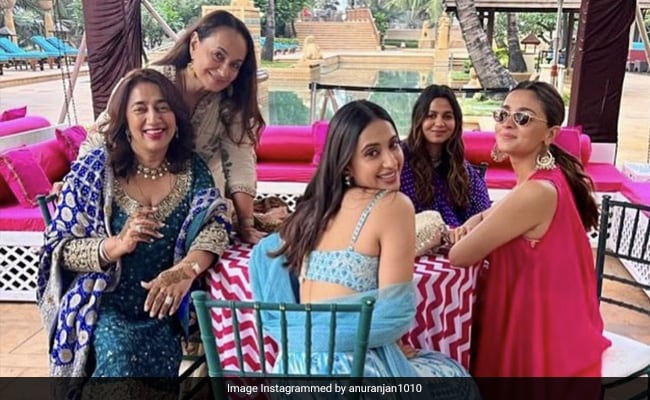 Anushka Ranjan's wedding celebrations have caught the attention of several fans and celebrities alike. Actress Alia Bhatt didn't miss her friend's big day. Alia and her mother, veteran actress Soni Razdan graced the wedding events in all pomp and show. A social media post shared by producer Anu Ranjan reveals it. The celebrity mother-daughter duo was present at a pool-side party during the festivities. The frame featured Alia, Soni Razdan, Anu Ranjan and her younger daughter Akansha Ranjan. In the photo, Alia is flaunting a fuchsia ethnic ensemble with black sunglasses while Soni Razdan looks serene in a white outfit. The two look perfectly decked up for the occasion. Here's proof. Anu Ranjan captioned the image, "Always heart to heart." To this, Soni Razdan commented, "True that."

Alia Bhatt scooped out some time from her packed schedule and attended most of the functions. She was present at Anushka Ranjan's wedding ceremony along with sister Shaheen Bhatt. Alia looks gorgeous in a yellow saree and floral headgear. We could also spot Sussanne Khan at one of the parties.

Celebrities have been gushing about this B-town wedding all week. Anushka Ranjan had shared several lovely photos from her big day on her Instagram timeline. In the album, we see the bride in a lavender-toned lehenga while Aditya seal is dressed in a sherwani. The caption read, "We have lived a few lifetimes in these four years and I cannot believe we're headed towards forever together."

Anushka Ranjan received a beautiful surprise on her big day. She was welcomed to the mandap with a song sung by none other than Aditya Seal. Sharing the video on Instagram, she wrote, "The moment I heard your voice my heart melted. How did I get so lucky? Thank you, Aditya, for this beautiful surprise. I couldn't have asked for a better song to walk towards our forever."

Anushka Ranjan has worked in films like Batti Gul Meter Chalu and Gulabi Lens. Aditya Seal has featured in several movies like Indoo Ki Jawani, Tum Bin 2 and Student Of The Year 2.