"I couldn't have asked for a better song to walk towards our forever," wrote Anushka Ranjan 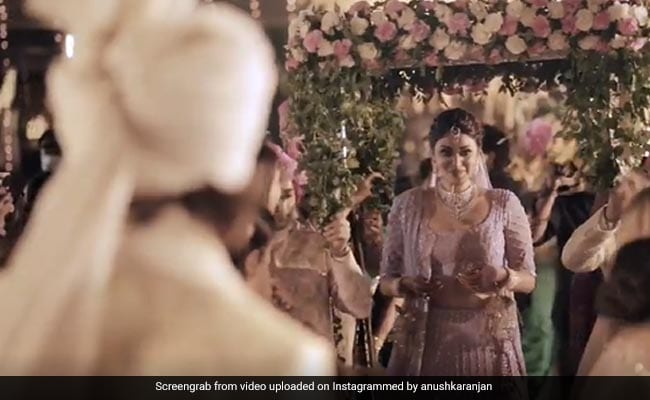 Anushka Ranjan Kapoor in a still from her video. (Image courtesy: anushkaranjan)

Anushka Ranjan Kapoor and Aditya Seal's wedding was dreamy in every sense. The couple got married in a lavish ceremony on Sunday. At their wedding, actor Aditya Seal surprised Anushka Ranjan by welcoming her to the mandap with a special song sung by him, a glimpse of which the actress shared on Instagram. Aditya sang Tere Jeya Hor Disda for his bride and the moment Anushka started walking down the aisle, the song began playing in the background, taking the actress by surprise. She got emotional and teary-eyed as she looked adorably at Aditya Seal, who was waiting for her at the stage. The clip also features Aditya smiling while looking at Anushka Ranjan Kapoor.

Sharing the video, Anushka Ranjan described the experience with these heartwarming words: "The moment I heard your voice my heart melted! How did I get so lucky. Thank you Aditya for this beautiful surprise.. I couldn't have asked for a better song to walk towards our forever. And of course I couldn't have done this without my gorgeous girls and handsome boys. You'll are my life and you mean the world and beyond to me. Thank you for making my day our gorgeous memory forever....I'm going to cherish this forever."

Actress Patralekhaa, who recently married actor Rajkummar Rao in Chandigarh, loved Aditya Seal's voice in his special song for Anushka. She commented: "Omg he sang! Aditya Seal, you have an amazing voice ... love love love it."

After her wedding, Anushka Ranjan Kapoor shared stunning photos of herself and Aditya Seal from their big day and wrote: "Since the day I've known you I haven't had one dull moment.. we have lived a few lifetimes in these 4 years and I cannot believe we're headed towards forever together. Adi you're my smile and you make me so happy .. thank you for choosing me every day and making my fears vanish and making me feel like the luckiest person to walk the earth. Now let's go live our happily ever after... I guess I did finally get SEALed."

He dedicated these posts to her:

Anushka Ranjan is an actress who has featured in films like Wedding Pullav, Batti Gul Meter Chalu and Gulabi Lens. Aditya Seal has starred in several movies like Indoo Ki Jawani, Tum Bin 2, Student Of The Year 2 and Namaste England.