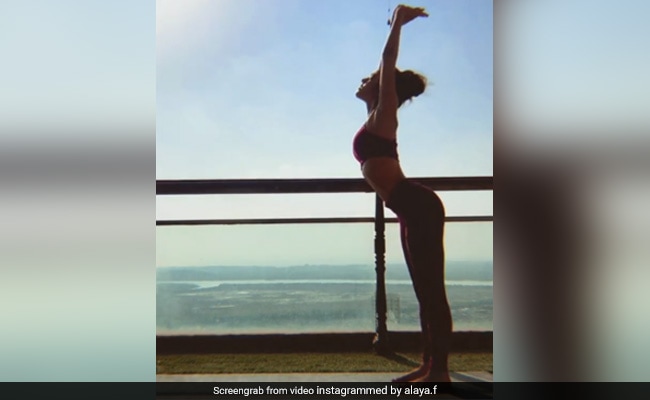 Bollywood newbie Alaya Furniturewalla has been sharing interesting updates from her lockdown diaries on Instagram. Sharing a recent video, Alaya wrote that she has adapted a new fitness mantra and is perfecting that with each passing day. Earlier, Alaya kept herself busy with face-painting, doodling and preparing protein pancakes but looks like yoga is what's keeping her busy these days. "I've never done yoga in my life but it's become my new favourite thing to find cool yoga videos and get super excited when I'm able to do what they're doing. Watch it till the end," Alaya captioned her video, in which she can be seen practising rather complicated yoga postures. Take a look at it here:

I've never done yoga in my life but it's become my new favourite thing to find cool yoga videos and get super excited when I'm able to do what they're doing watch it till the end!! . Song: Kho Gaye Hum Kahan by Jasleen Royal and Prateek Kuhad

Here are some more glimpses of her yoga diaries:

Inspired by @jacquelinef143 and @kuldeepshashi sir I was dying to try this inversion challenge but everyone told me "this is not something you can just get up and learn in one day".. I fell on my face a few times but DID IT ANYWAY (wait for the end where I try to be very cool and fall)

The world is upside down and so am #QuarantineExercise #StayHome #StaySafe

Only recently, Alaya shared an ROFL video of Who's Most Likely To TikTok Challenge on Instagram, in which both she and her brother Omar pointed at mom Pooja Bedi in response to the query: "Who's most likely to kill someone?" Alaya captioned her post this way: "Had to do this with my mother and brother."

Had to do this with my mother and brother @poojabediofficial @_omar.f_ I hope you enjoy this #whosmostlikelyto because there are two more coming your way TikTok- AlayaF_

Alaya Furniturewalla made her Bollywood debut this year with Jawaani Jaaneman, in which she co-starred with Saif Ali Khan and Tabu. Alaya's grandfather, actor Kabir Bedi, attended the film's launch while the film's screenings were attended by Alaya's parents and their respective partners. Alaya made an impression with her debut film on audiences and critics alike. Here's an excerpt from NDTV's review: "The brightest spark in Jawaani Jaaneman is Alaya Furniturewalla. When you watch a young actress having fun before the camera rather than striving to prove herself, you instantly know that she's one confident performer. She has the chops."