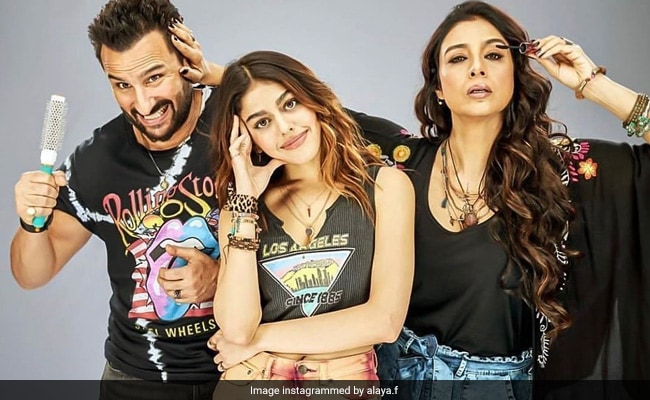 A breezy love story with an unabashedly cockeyed twist that gives it a topsy-turvy rhythm, Jawaani Jaaneman, directed by Nitin Kakkar (Filmistaan), puts a vigorous spin on the father-daughter relationship drama and guides it into a space where many surprises lurk. A few elements in the film might appear a touch affected, but the screenplay keeps the proceedings mostly light and unassuming.

The principal actors - Saif Ali Khan, debutante Alaya Furniturewalla and Tabu (in a special appearance as a coquettish bohemian who, by her own admission, is happy between meditation and hashish) - get into the swing of things with effortless ease, raising the dramedy to an out-of-the-ordinary level.

An Amsterdam-born Indian girl looking for her father finds him in London. A confirmed bachelor who, as one of his friends reminds him, is at a point of life where he has a longer past than a future, finds a purpose even though he isn't really looking for one. It takes him a great deal of time to make sense of the sudden intrusion. When he does, he discovers love in one of its purest forms - the love that he feels for his daughter and her unborn child.

Saif Ali Khan brings great energy and charm to bear upon the role of Jaswinder "Jazz" Singh, a commitment-phobic, philandering real estate broker on the wrong side of 40 who learns the hard way that flying solo isn't the only way of getting through the ups and downs of life.

Alaya Furniturewalla, in the role of Tia, who springs herself upon the man and claims that there is a "33.33 per cent chance" that he is her biological father and then talks him into undergoing a DNA test, is wonderfully well cast as the chirpy, uninhibited youngster who asks for no quarters and gives none.

This largely unsentimental and completely non-judgmental brand of storytelling in which even the flawed male protagonist isn't put under a moralistic scanner for his transgressions. He spouts lines like "Sher tab tak raja hota hai jab tak akela hota hai (A lion is a king only until it hunts alone)," but he isn't projected as a completely insensitive oaf.

Jazz has no qualms about having one-night stands and has no time to either look back at how he has lived thus far or worry about what the future holds for him. But the best-laid plans of men... go awry, don't they? Jazz receives his comeuppance not as punishment for acting unwisely but as a reward for hanging in there until he is ready to shoulder the responsibility of a daughter born out of a youthful fling - Tabu's character, Ananya, who talks of chakras and positive energy, calls it 'sambhog' and leaves it at that.

Seen from the standpoint of the reluctant father who loves his freedom more than anything else in the world, Jawaani Jaaneman is a tale that hinges on a delayed attainment of adulthood hastened in the end by the emergence of the 21-year-old girl who triggers great turmoil in the man's heart and mind.

Jazz, who brokers property deals with his brother Dimpy (Kumud Mishra), is given to hitting the dance floor to celebrate little his triumphs as well as to forget his bouts of sorrow. He hits upon every girl he sets his eyes on in the nightclub, but he rarely bothers to remember her name.

On the business front, Jazz isn't doing too well. A big real estate deal is stuck in a limbo because his landlady, Mallika (Kamlesh Gill), is unwilling to sell her part of a residential complex that one of London's biggest real-estate firm wants to convert into a towering highrise. Eventually, a willow tree that the old woman holds dear becomes a bargaining chip thanks to Tia's intervention.

The most interesting aspect of Jawaani Jaaneman is that, barring stray sequences in which Jazz's mom (Farida Jalal) and dad fret over their sons' choices, it does not have any character sitting in judgment on the actions of the others. When the hero's mother learns that she has a granddaughter who, on her part, is weeks away from becoming an unwed mother herself, she does not do a double flip.

She hugs Tia with all the warmth that she can summon, leaving the girl is raptures. I came to look for my father, I've found a family, she gushes to her dad, who by this point in the story has begun to realise that there is no percentage in hiding one's advancing years.

For Jazz, age is only a number, but nobody around him is willing to let him forget that he isn't getting any younger. He sees every move that a woman makes as an amorous advance, but Rhea (Kubbra Sait), the divorcee hairdresser who periodically colours his hair, ticks him off in no uncertain terms. I am your age and too old for you, besides I am not your type, she asserts. Jazz is at a loss for words for once.

At the bar, a cocky brat taunts Jazz when he refuses to order a shot. The old man is tired, the boy says. Jazz takes the insult to heart and engages in a drinking contest with the lad half his age. The consequence isn't happy: he tumbles off the bar table and breaks his right foot.

Jawaani Jaaneman is a bright and happy film. It is eminently watchable for the most part, not the least because the dialogues (by Hussain Dalal and Abbas Dalal) are free-flowing and witty. When an actress of Tabu's calibre says "he needs meditation" with just the right degree of all-knowing insouciance, you believe her.

Jazz is right up Saif Ali Khan's street - he pulls off a remarkable star turn without breaking a sweat. Kubbra Sait, playing the firm-as-a-flagpole Rhea, strikes the right notes.

The brightest spark in Jawaani Jaaneman is Alaya Furniturewalla. When you watch a young actress having fun before the camera rather than striving to prove herself, you instantly know that she's one confident performer. She has the chops.

Saif will draw you into Jawaani Jaaneman. Alaya will keep you glued even when the pace of the film seems to flag a bit.