"I'm going to put out a dance video on August 30," wrote Alaya Furniturewalla 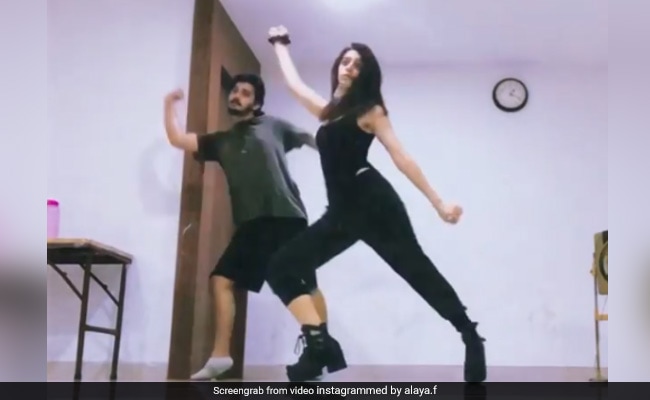 Alaya in a still from the video. (courtesy alaya.f )

A quick glance through Alaya Furniturewalla's Instagram profile will give you a fair idea of what a pro the actress it when it comes to fitness and dancing. The 22-year-old actress, on Wednesday, posted a video oh her Instagram profile, in which she could be seen dancing along with a friend. Dressed in a black top and a matching pair of tracks pants, Alaya can be seen grooving with utmost ease in the video. She captioned her post: "Getting a goal on my Instagram so I'm obligated to follow through with it. I'm going to put out a dance video on August 30! Pressure is on Utkarsh."

Setting a goal on my Instagram so I'm obligated to follow through with it I'm going to put out a dance video on the 30th of August! Pressure is on @utkarshc21

Last week, Alaya shared a video dancing on her Instagram profile and she captioned it: "Flying into your Sunday feed." This is the video we are referring to:

Here's another video from Alaya Furniturewalla's dance session. She wrote in her post: "You guys enjoyed the fail version where I got my extensions pulled out so I thought it's high time I post the cooler one." Check it out, you can thank us later:

Alaya Furniturewalla is the daughter of Bollywood actress Pooja Bedi and her ex-husband Farhan Furniturewalla. Alaya made her debut in Bollywood with Jawaani Jaaneman, which released in January this year. Alaya co-starred with Saif Ali Khan and Tabu in her first ever Bollywood movie, which opened to largely positive reviews from film critics as well as audiences. She hasn't announced any upcoming projects as of now.