Alanna lives in Los Angeles with her boyfriend 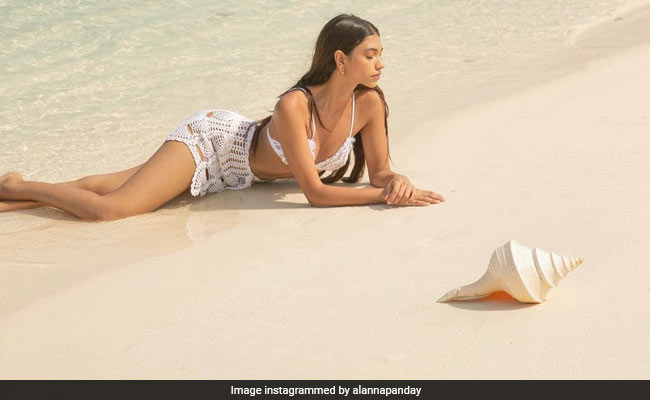 Model Alanna Panday's Instagram feed a visual treat. Alanna, who is the cousin of actress Ananya Panday, often shares stunning pictures of herself clicked by her boyfriend Ivor. In her latest post, Alanna looks nothing less than a "mermaid" - as per her mother Deanne Pandey and her fans. Sporting a knitted bikini, Alanna can be seen lying on the beach with waves touching her feet. A seashell kept near her on the beach added more beauty to the picture. Deanne Pandey, who is missing hr daughter very much, wrote this in the comments section: "Stunning you look my mermaid...love you so much and miss you." Alanna lives in Los Angeles with her boyfriend while Deanne Pandey is in Pune.

Alanna Panday recently gave us a glimpse of her breakfast date with Ivor. The duo can be seen enjoying a breakfast with a breathtaking view in the Maldives.

Alanna Panday trended big time on social media last month after she opened up about moving in with her boyfriend in Los Angeles. In a YouTube video, Alanna also revealed how mom Deanne Pandey and dad Chikki Panday (Chunky Panday's cousin) reacted when she moved in with Ivor. "They were so happy. I remember telling my mom first that we are getting a house and she was absolutely ecstatic," she said and added: "Parents are super open-minded about everything. Not just about living with Ivor, I think my parents are super open-minded in general. So, there was no convincing. I just called them one day and said: 'Hey guys, this is the guy. I love him. We are staying together'."

Alanna's cousin Ananya made her debut in Bollywood with the 2019 film Student Of The Year 2 and has featured in films like Pati, Patni Aur Woh and Khaali Peeli.