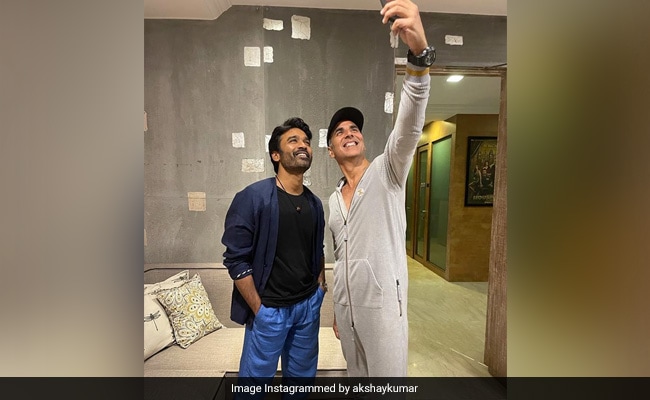 What happens when two National Award-winning actors meet each other? A whole lot of mutual admiration. At least, that is exactly what happened when Akshay Kumar and Dhanush, who will be sharing screen space in Atrangi Re, met up in Mumbai for the promotions of the film. The two actors, upon meeting, shared that they “look up” to each other. What followed was a selfie that sent the Internet into a meltdown. Sharing a photo of them clicking the selfie, Akshay Kumar wrote, “Today my Atrangi Re co-star Dhanush K Raja came calling. ‘Sir, I always look up to you,' he said. I replied, ‘I look up to your amazing talent.' Then we both looked up. And this happened,” referring to them posing for a selfie.

In another set of pictures that Dhanush shared from his visit to Mumbai for promotions of the film, the actor was seen interacting with Sara Ali Khan, the lead actress of Atrangi Re as well as filmmaker Karan Johar.

Akshay Kumar, meanwhile, was seen brushing shoulders with Oscar Award-winning composer AR Rahman, who has produced the music for Atrangi Re. Sharing a photo, Akshay Kumar wrote, “With the music maestro AR Rahman, the mastermind behind the soulful music of Atrangi Re at the album launch today.”

Atrangi Re, which stars Sara Ali Khan, Akshay Kumar and Dhanush in lead roles, is directed by Aanand L. Rai. The film is jointly produced by T-Series, Colour Yellow Productions and Cape of Good Films. The film will release on the Disney+ Hotstar streaming platform on 24 December 2021. In addition to Hindi, Atrangi Re will also be available for viewing in Tamil.