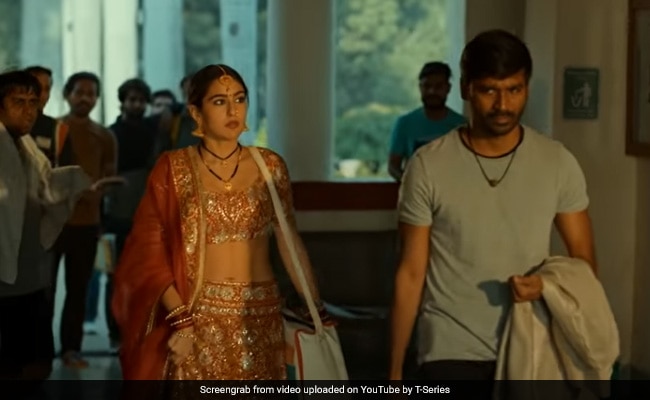 Another track from the film Atrangi Re, titled Rait Zara Si, released on Monday morning and it is as soothing as it gets. The track begins with a visual of Sara Ali Khan and Dhanush getting forcefully married. Sara then narrates her and Akshay Kumar's epic love story to her husband Dhanush. She states that it s one of a kind story. Sara Ali Khan's heart can't decide between Akshay Kumar and Dhanush, which leads to all three of them suffering in silence. Dhsnush can't stop falling for Sara and Akshay can't get her. The track has been sung by Arijit Singh, Shashaa Tirupati and it has been composed by A R Rahman.

Before Rait Zara Si, the makers shared another song from the film titled Chaka Chak. It has been sung by Shreya Ghoshal. The track features Sara dancing with all her heart as Dhanush is about to get engaged to someone else, right in front of Sara's eyes, who he is forcefully married to. The song is trending big time.

Atrangi Re is Dhanush's second film with Aanand L Rai after the 2013 film Ranjhanaa. It is Akshay Kumar's first film with Sara Ali Khan and Dhanush. The film has been produced by Bhushan Kumar, Colour Yellow Productions and Cape Of Good Films. The film's hooting began in 2020. However, it was halted due to the pandemic and the lockdowns .During the film's shoot, actor Akshay Kumar and the film's director Aanand L Rai had contracted the virus due to which the film was delayed again.

The film is slated to release on December 24 and it will clash with Ranveer Singh's '83.