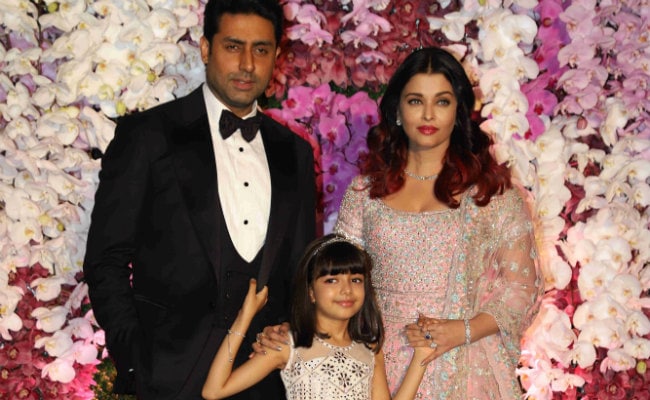 Aaradhya Bachchan with Abhishek and Aishwarya at the Ambani bash

Aaradhya Bachchan's reaction to the never-ending requests from the paparazzi to pose at the Ambani bash last night is adorable and absolutely on-point. The seven-year-old Bachchan accompanied her parents - Abhishek and Aishwarya Bachchan - to Akash Ambani and Shloka Mehta's wedding reception on Sunday night and cracked everyone up while exiting the photo-op area. "Bas karo," Aaradhya, who clearly had had enough of the popping flashbulbs, told the shutterbugs as they asked the Bachchan trio to pose for a while more. Both Abhishek and Aishwarya, who were on either side of Aaradhya, laughed out loud and so did the flocked up paparazzi.

But it wasn't just that. Aaradhya was also spotted hilariously rolling her eyes at the cameras and it appears that Abhishek and Aishwarya were unaware of Aaradhya's antics. Videos and photos of Aaradhya's expressions from last night have been curated by fan clubs and are going crazy viral.

Okay, so, that was Aaradhya Bachchan from last night. She even addressed the usual "left, right and center" drill while posing for the paps at Akash Ambani's wedding on Saturday. Her expressions will surely crack you up. On Twitter, folks reacted with tweets such as: "Aaradhya cracks me up! This little girl has so much personality and sass, OMG." Another one added: "Aaradhya actually said 'bas kardo' in the end and that's why they are laughing. I can't..."

Lmao Aaradhya cracks me up! This little girl has so much personality and sass omg!

Aaradhya actually said BAS KARDO in the end and that's why they are laughing. I can't

Front view and then AB and Ash burst into a laugh as they left lol Aaradhya is such a sassy queen already hehe! pic.twitter.com/fCqnXC5aBw

I can't with Aaradhya's left right center she is so Funny yaar . She knows how to deal with paparazzi Nd I love that #AishwaryaRaiBachchan#AaradhyaBachchanpic.twitter.com/OcQ5eJtfnO

Well, we can't really blame the paparazzi for going crazy if the Bachchan trio walk out looking like this.

A post shared by AishwaryaRaiBachchan (@aishwaryaraibachchan_arb) on Mar 10, 2019 at 8:22am PDT

... daughters are the best .. !!especially when she chooses what the Father should wear !!

Diana Rigg, Star Of Game Of Thrones And Bond, Dies At 82