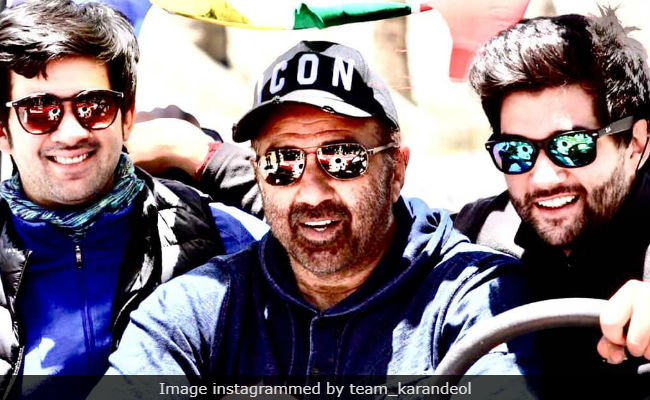 Sunny Deol is launching his elder son Karan Deol in work-in-progress film Pal Pal Dil Ke Paas after which he will get busy launching his younger son Rajvir. Speaking to news agency PTI, Sunny Deol said that after completing Pal Pal Dil Ke Paas and some other projects he will shift his focus on selecting the right film for Rajvir Deol. "After I finish my first son's film, I'll jump into one of my acting projects before I start my second son's film," Sunny Deol told PTI. Sunny Deol is currently awaiting the release of Yamla Pagla Deewana: Phir Se, co-starring his father Dharmendra and brother Bobby Deol. In addition, Sunny Deol has a few pending projects such as Bhaiyyaji Superhitt while he has to give a nod to some other projects - like the film with Rajkumar Santoshi.

It was recently reported that Sunny Deol will be collaborating with Rajkumar Santoshi, 22 years after he starred in his film Ghatak were doing the rounds on social media. Speaking about the project, Sunny Deol told PTI: "I see myself situated in a place where I'll either be working with Raj (Kumar Santoshi) or a couple of more directors. That's what we are working on right now."

Sunny Deol has made three critically acclaimed films with Rajkumar Santoshi Ghayal (1990), Damini (1993) and Ghatak (1996). Sunny Deol won a National Award for his role in Damini. However, 16-year-ago Rajkumar Santoshi crushed Sunny Deol in the box office battle between The Legend Of Bhagat Singh and 23rd March 1931: Shaheed, which was produced by Dharmendra.

Though Sunny Deol is investing most of his time in launching his son Karan, he said he missed acting. "Workwise, I'm going to be doing a couple of more films. I've missed acting. I've been busy with Yamla Pagla Deewana: Phir Se and my son's debut," Sunny told PTI.

Yamla Pagla Deewana: Phir Se is set to be released on August 31.