Katrina Kaif and Vicky Kaushal got married on Thursday in Sawai Madhopur, Rajasthan 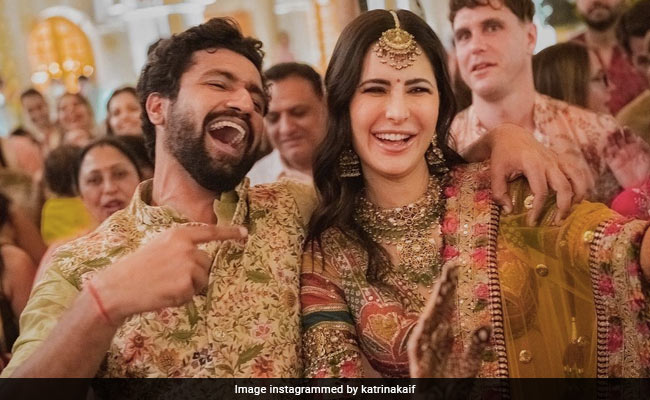 Katrina Kaif and Vicky Kushal at their mehendi.(courtesy: katrinakaif)

Katrina Kaif and Vicky Kaushal's wedding pictures keep getting better and better. After sharing stunning pictures from their haldi ceremony, the couple shared pictures from mehendi and they are picture perfect. "Mehendi Taa Sajdi Je Nache Saara Tabbar," Katrina Kaif captioned the post. Vicky Kaushal too shared a set of pictures from the ceremony, with the same caption. The henna for the mehendi was reportedly been sourced from Sojat in Rajasthan and was chemical free. The henna reportedly cost between Rs 50,000 and Rs 1 lakh but, also reportedly, the business supplying the henna did not charge the couple.

Katrina Kaif and Vicky Kaushal flew to Rajasthan on Monday along with their families. Both the actors were clicked at the Mumbai airport (separately). Their smiles said it all. Their wedding festivities began with a mehendi ceremony on Tuesday. The pheras were reportedly preceded by a sehrabandi ceremony. The sangeet was held on Wednesday. Some pictures from the haldi ceremony:

The couple had reportedly been dating for 2 years. The venue for the festivities was the Six Senses Resort, Fort Barwara in Sawai Madhopur, Rajasthan. The couple invited very few guests from the film fraternity, which included Neha Dhupia and husband Angad Bedi, Mini Mathur and husband Kabir Khan, Malavika Mohanan, Sharvari Wagh.