Charu Asopa said: "Maybe, he was brainwashed into deleting our pictures from his social media handles." 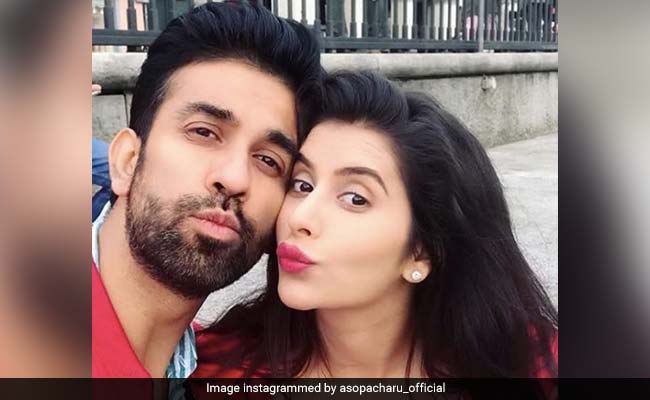 A picture of Charu Asopa and Rajeev Sen.(Image courtesy: asopacharu_official)

Sushmita Sen's brother Rajeev Sen and Charu Asopa have been trending for days after reports of their separation spread like wildfire on the Internet. Charu and Rajeev unfollowed each other on Instagram and they've also deleted pictures of each other on social media, which fuelled the separation rumours. After refraining from giving direct answers about their relationship status for weeks, Rajeev Sen claimed that "someone close to Charu is brainwashing her" in an interview with Times of India. A day after Rajeev Sen's explosive interview, Charu Asopa, who has featured in shows like Mere Angne Mein, retaliated by saying that "no one is brainwashing her" and that she "makes her own decisions."

Speaking to TOI, Charu Asopa said, "No one is brainwashing me. I am mature enough to make my own decisions - something that I have always done. Maybe, he was brainwashed into deleting our pictures from his social media handles."

She also alleged that Rajeev Sen moved out of their Mumbai house (something which Rajeev has denied in several interviews) a few days before their first wedding anniversary. "If he thinks that I am innocent and gullible, and could be influenced by those around me, why did he leave me to live on my own during these tough times? This is the time for families to come together and be by each other's side. But, Rajeev moved out and flew to Delhi a few days before our first wedding anniversary. It's been two months now. Why would he do that?" she said.

"There is no cure for doubt. What led to this and the issues in our relationship... there is a lot that I can talk about, but I don't want my personal life to become a public spectacle. I don't want it to become a part of anyone's gossip session," Charu Asopa added.

Rajeev Sen and Charu Asopa got married in a civil ceremony last year followed by a grand celebration in Goa.