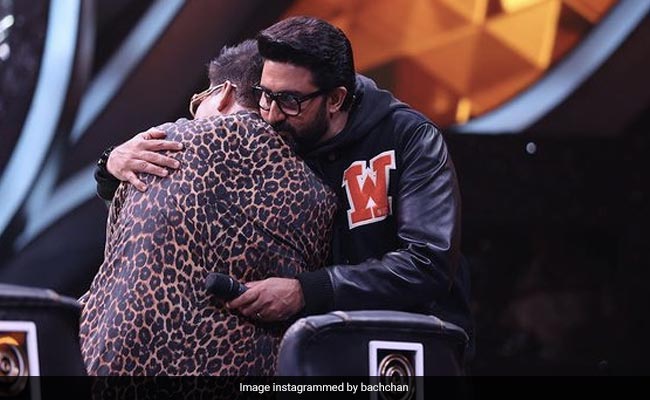 Abhishek Bachchan is on a roll. After impressing everyone with his performance in Dasvi, Abhishek is now making a point to ace the caption game on social media. Abhishek has shared a couple of pictures from his visit to the reality show Hunarbaaz - Desh Ki Shaan. Sounds normal, right? There is a twist. In the caption, Abhishek wrote, “I guess I'm a hugger.” Because he is giving hugs to all the judges, Karan Johar, Parineeti Chopra, Mithun Chakraborty, and Geeta Kapur. Abhishek's cousin Naina Bachchan was quick to drop her comment under the pictures. She wrote, “All hearts” and added a red heart icon.

Abhishek Bachchan was joined by his Dasvi co-stars Yami Gautam and Nimrat Kaur on the sets of the reality show. Here are the pictures we are talking about:

Abhishek Bachchan plays the role of chief minister Ganga Ram Chaudhary. The storyline revolves around Abhishek's character who lands up in jail. Things take a turn when Yami Gautam's Jyoti Deswal makes an entry as the jail's superintendent. Nimrat Kaur is seen as Abhishek's wife. And, to everyone's delight, Nimrat's Vimla Devi has managed to grab Amitabh Bachchan's attention. The veteran actor has sent a handwritten note to Nimrat for her “exceptional” performance. The letter read, “We have hardly any interactions or meetings. The last was a compliment I gave at an event at YRF- for the Cadbury AD. But your work in Dasvi is exceptional- nuances, gestures, all. My deep admiration and congratulations.”

Sharing the picture of the hand-written note, Nimrat Kaur wrote, “18 years ago when I set foot in Mumbai city, to imagine that Mr Amitabh Bachchan would know me by my name, recall us meeting and him appreciating me in a television commercial and years later send a note and flowers for something I attempted in a film - all would've been but a distant dream, perhaps someone else's for me, not even my own.”

The film is directed by debutant Tushar Jalota.