Big B received the Dadasaheb Phalke Award on Sunday 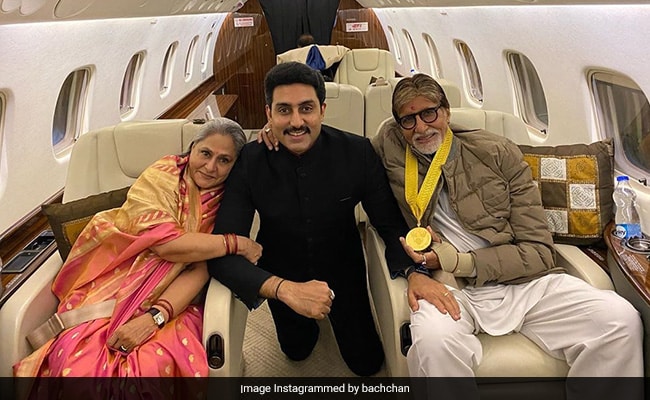 Abhishek Bachchan posted a happy picture on his Instagram profile on Monday morning, which features the actor along with his parents Amitabh Bachchan and Jaya Bachchan. The reason behind the big ear-to-ear grins on the faces of the Bachchans could be attributed to the fact that Amitabh Bachchan was honoured with the Dadasaheb Phalke Award on Sunday evening. The trio can be seen smiling with all their hearts in a picture that was posted by Abhishek from a plane. "A memory to cherish. Dadasaheb Phalke Award. #theparentals," the Guru actor wrote.

In a separate post, Abhishek congratulated Big B for the prestigious award. "My inspiration. My hero. Congratulations Pa on the Dadasaheb Phalke award. We are all so, so proud of you. Love you," he wrote.

My inspiration. My hero. Congratulations Pa on the Dadasahab Phalke award. We are all so, so proud of you. Love you.

Big B shared glimpses from his special moments on Twitter and wrote: "My immense gratitude and respect for this moment." Mr Bahchan was presented the Dadasaheb Phalke Award - India's highest film honour - for his stupendous contribution to Indian cinema. President Ram Nath Kovind presented the award at the Rashtrapati Bhavan.

After receiving the award, Big B said, "When this award was announced, a doubt arose in my mind: if this is an indication for me to sit at home and relax after working for so many years? There is some more work I have to finish and certain possibilities are coming up where I may get a chance to do some work," news agency PTI stated.

On the work front, Amitabh Bachchan was last seen in Badla, co-starring Taapsee Pannu. The actor has films like Gulabo Sitabo, Chehre and Jhund, in the pipeline.