"May the film achieve all the success it deserves and more," Aamir Khan wrote for Panipat 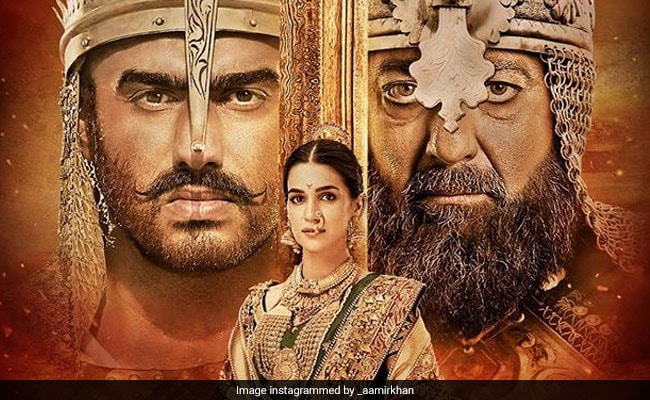 Aamir Khan sent out best wishes to his Lagaan director Ashutosh Gowariker for his upcoming film Panipat and also cheered for Arjun Kapoor, Sanjay Dutt and Kriti Sanon, who headline the cast of the film. In an Instagram post just days ahead of Panipat's release, Aamir Khan wrote: "Dear Ashu, Wishing Sanju, Arjun, Kriti and you, all the very best for Panipat! May the film achieve all the success it deserves and more!" Arjun and Kriti responded to Aamir Khan's shout-out within minutes in the comments section. "Thank you so much Aamir sir... hope you manage to watch during your journey of bringing Laal Singh Chaddha to life," wrote Arjun while Kriti added: "Thank you so, so much sir! Waiting for you to see it!"

Take a look at Aamir Khan's post and the thank you messages here:

Dear Ashu, Wishing Sanju, Arjun, Kriti and you, all the very best for Panipat! May the film achieve all the success it deserves and more! Love. a. 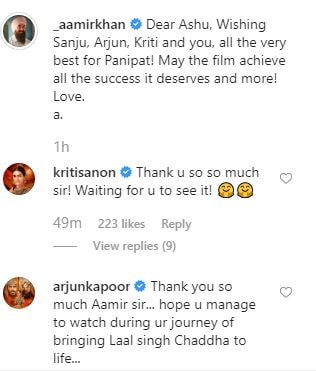 Like Arjun said, Aamir Khan is currently busy with the schedule of his new film Laal Singh Chaddha, which is Bollywood's version of 1994 film Forrest Gump. Aamir co-stars with Kareena Kapoor in the movie, both of who are in Amritsar for the film's shoot.

Meanwhile, the team of Panipat also received a massive shout out from Amitabh Bachchan, who shared the film's trailer to write: "This massive extravaganza from dear friend and prolific maker Ashutosh Gowariker... Dec 6. My wishes as ever with you Ashu." For the uninitiated, Amitabh Bachchan had a major role to play in Lagaan - he was roped in for the background narration.

T 3568 - PANIPAT .. this massive extravaganza from dear friend and prolific maker Ashutosh Gowariker .. 6th Dec ..
my wishes as ever with you Ashu .. !https://t.co/9IvtQ0jvAO

Ashutosh Gowariker, who has directed critically acclaimed period pieces like Jodhaa Akbar and Lagaan, adds one more to the genre with Panipat, based on the Third Battle of Panipat, with Arjun Kapoor playing Sadashivrao Peshwa, who was the commander-in-chief during the 1760 battle and died on the battle field.

Panipat releases on December 6 and will clash with Pati Patni Aur Woh.