A Pic Of Amitabh Bachchan From Zanjeer Days. Guess Who Sent Him This?

The actor has shared a still from the sets of the iconic film Zanjeer. 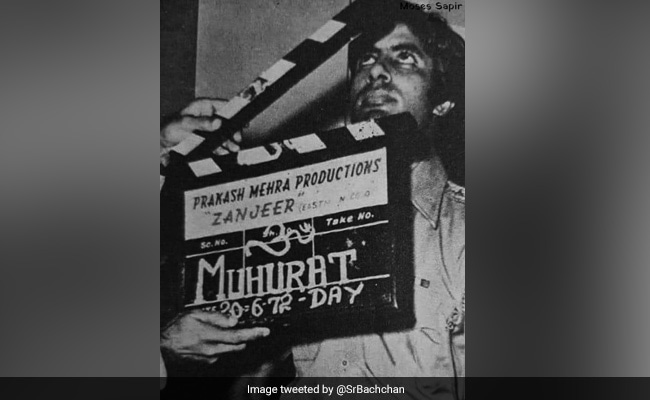 Can we call Amitabh Bachchan the king of throwback moments? Because, right now, we can't think of a better title for the veteran actor. We aren't exaggerating here. You will also agree after seeing the latest post shared by the actor. So, where it is? On Twitter. Amitabh Bachchan has uploaded a throwback snap from the sets of the iconic film Zanjeer. The best part? The picture features the muhurat shot. We see the clapperboard, in front of Amitabh Bachchan, with the name of the film and muhurat written on it. Then, there is a strap for the dateline and it read, “June 30, 1972”. What else do you need on a post-Diwali morning? But, wait there is more. The picture is not from Amitabh Bachchan's photo gallery. Someone sent it. No more suspense. The actor has revealed the name in his caption. Read it here. “T 4086 - Javed [Akhtar] saheb sent this picture.” Javed Akhtar along with Salim Khan had penned the dialogues for Zanjeer.

The Prakash Mehra directorial cemented Amitabh Bachchan's position as the “angry young man” of Bollywood.  The film also featured Jaya Bachchan and Pran Sikand in crucial roles. Here is the muhurat shot we are talking about. Take a look:

Fans couldn't keep calm and shared their excitement in the reply box.

A person wrote, “Historic moments of Hindi cinema. The iconic angry young man we got. Love you, Amitji.”

Historic moments of Hindi cinema! The iconic Angry Young Man we got!
Love you Amitji @Javedakhtarjadu ????????

This person said, “The shot where it began for the legend.”

The shot where it began for the legendd

​​A fan said that he has watched Zanjeer multiple times.

Another shared a poster of the film and wrote, “Sir, super-duper hit movie still we are missing and watching, whenever get time.”

Sir super duper hit movie still we are missing and watching, whenever get time. pic.twitter.com/C9k2mhBMvz

“Quite an auspicious kick-start. No wonder all your films are a hat-trick. A true enigma,” read a comment.

Quite an auspicious kick-start! No/Know wonder all your films are a hat-trick...!! A True Enigma'

In Zanjeer, Amitabh Bachchan plays Vijay Khanna, an honest police officer. The plot revolves around Vijay, who came face-to-face with his parents' killer and plans to punish him.