A Page From Twinkle Khanna And Daughter Nitara's 'Tress'ential Diaries 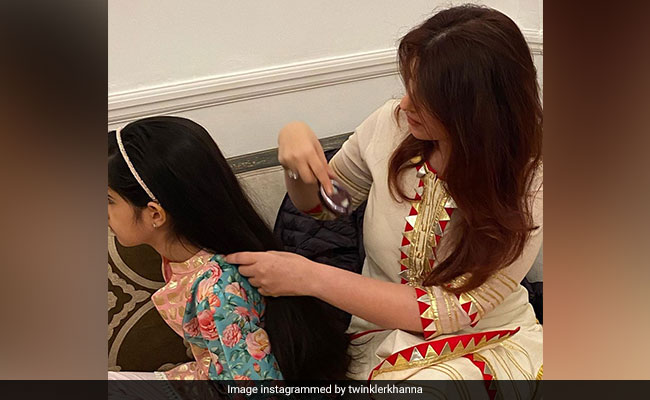 Twinkle Khanna's latest Instagram entry has our heart. The author posted a super cute picture of herself along with Nitara, in which Twinkle can be seen brushing her daughter's hair. Twinkle Khanna added the hashtag #MadAboutMissy to her post. She added a humour-infused caption along with the post and she wrote: "Being a mom often means brushing her immaculately groomed hair one last time when you are the one who needs to run a brush through your haystack desperately." Twinkle shared the same picture in a greyscale mode earlier. However, she deleted it and posted a coloured version of the adorable photograph.

Twinkle Khanna and Akshay Kumar co-starred in films such as International Khiladi and Zulmi. They got married on January 17, 2001. The couple are parents to 18-year-old Aarav and Nitara (8). Twinkle frequently shares posts featuring her daughter, most of which are related to books and their reading time. See the posts here:

Twinkle Khanna has authored three best-selling books. Her first book Mrs Funnybones was a compilation of her columns. Her second book The Legend Of Lakshmi Prasad was an anthology of short stories, while her third book was a novel titled Pyjamas Are Forgiving.

Besides being an author, Twinkle Khanna is also a celebrated columnist and an interior decorator. She runs a store named The White Window. Twinkle is also a film producer and runs a digital content company called Tweak India.

Twinkle Khanna, who made her Bollywood debut with 1995's Barsaat, starred in films like Baadshah, International Khiladi, Dil Tera Diwana, Jaan, Joru Ka Ghulam and Jab Pyaar Kisise Hota Hai - some of these were hits and some misses . She quit movies after she married Akshay Kumar in 2001 and was last seen in Love Ke Liye Kuch Bhi Karega.