"Should we do an entire series of taking figurative phrases and making them literal?" wrote Twinkle 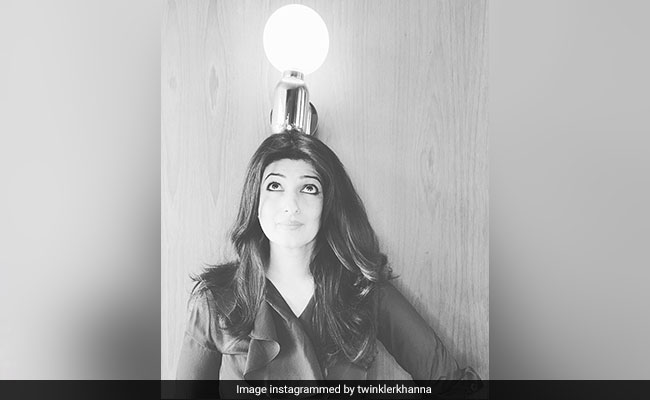 Twinkle Khanna, who in known for her humour-infused posts, engaged her fans once again in an interesting, as well as thought-provoking post on Saturday. The actress-turned-author posted a black and white picture of herself posing below a wall-mounted bulb and captioned it with a play on words. She wrote: "A light bulb moment - Should we do an entire series of taking figurative phrases and making them literal?" Twinkle also added this epic hashtag to her caption - #BookwormsCanBorrowBrightIdeas. Her fans flooded her post with comments such as "yes, please!" and "what an amazing idea." Here's the post we are talking about:

A light bulb moment-Should we do an entire series of taking figurative phrases and making them literal? #BookwormsCanBorrowBrightIdeas

Twinkle Khanna's posts, more than often, leave us in splits. She recently shared a set of photos featuring son Aarav and daughter Nitara. In one of the pictures, the siblings can be seen getting into a fight. "Being a mom involves quick transitions - it's a matter of seconds before you go from lazing peacefully on the grass into the midst of a war zone! #MamaMiaHereWeGoAgain," she captioned the post.

Being a mom involves quick transitions-it's a matter of seconds before you go from lazing peacefully on the grass into the midst of a war zone! #MamaMiaHereWeGoAgain

Today as I am prepping for a cook-off with a recipe from our What's In Your Dabba cookbook, I wish I could send my son to do my bit instead. Our divergent skill sets are clearly depicted in this picture. He baked the cake and I made the coffee:) #whatsinyourdabba #hopelesschef

All right, I am guilty of conjuring up a mutton lady who chops little kids' fingers off, while he seems to invent dishes like chocolate parathas. As we go on answering all the questions that the kids throw at us, we discover that we do have two things in common. We both believe that real-life superheroes beat fictional heroes. And we are both happy when he does stunts, but for different reasons. Click on link in bio to order the Tweak Books we are talking about in the video- A children's book about real-life Indian heroes called When I Grow Up I Want To Be and our cookbook, What's in your Dabba?

Happy 18th birthday Aarav! Here is something I had written for you once and to keep loosening the strings and finally cutting them off this year has not been easy. All these years you have been as much my teacher as I have been yours. I learned optimism, kindness and wonder from you as I taught you maths, a few manners and how to switch the lights off when you leave the room. But looking at you growing up and listening to you repeatedly tell me how much you are looking forward to your independence, I have started realizing that when you finally leave my home, my world and step into your own, my lights will go off automatically and my world will be filled with a bleak darkness. Though whenever you return for a visit, I will light numerous diyas and pretend that this is not a permanent power failure; we are just celebrating Diwali. I am already missing the little boy you were but am so proud of the man you have become. #MamaBear #MoustacheMusketeers

Twinkle Khanna married actor Akshay Kumar in 2001. The couple welcomed Aarav the next year and daughter Nitara in 2012.

Twinkle Khanna has featured in several films like International Khiladi, Baadshah, Yeh Hai Mumbai Meri Jaan, Uff! Yeh Mohabbat and Joru Ka Ghulam before she switched careers to become a best-selling author. Twinkle is now an author, a columnist, an interior designer and a producer.