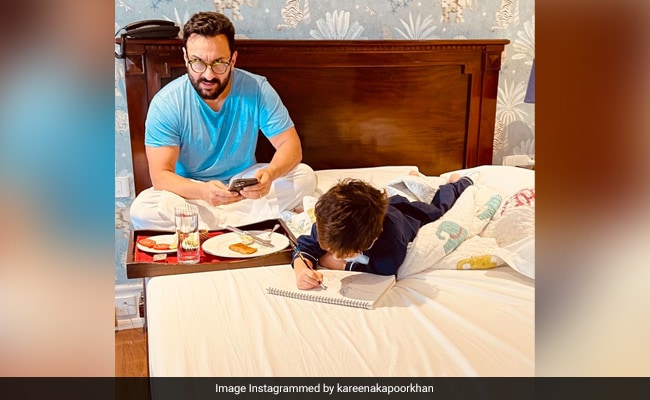 Saif Ali Khan might be a social media recluse but thanks to Kareena Kapoor, we often get a glimpse of the actor on Instagram. Kareena loves to document moments with her family and she did just that on Thursday morning. Sharing a picture of husband Saif Ali Khan and son Taimur, she wrote: "My mornings... Saif - Beboo are you taking another picture for Instagram? Me - Ummmmm Click! Saifu and Tim Tim. My boys." Baby Jeh is missing in the frame though. The picture got a whole lot of love from Kareena Kapoor's Instafam.

Kareena Kapoor  and Saif Ali Khan welcomed son Jeh on February 21 this year. "We have been blessed with a baby boy. Mom and baby are safe and healthy. Thank you to our well-wishers for their love and support," Saif said in a statement. Kareena and Saif Ali Khan married in 2012 after dating for some years. Here's a picture of Saif and Jeh.

Kareena Kapoor and Saif Ali Khan, co-stars of films like Omkara, Agent Vinod and Kurbaan, fell in love during the shooting of the film Tashan. In her piece for Humans Of Bombay, Kareena Kapoor once said, "Somehow through my life, I've been blessed with people who have supported me thoroughly! So just when I thought I was falling, Saif caught me. I'd met him before, but while we were filming Tashan, something changed. I wore my heart on my sleeve! He was so charming; I fell for him hook, line and sinker."