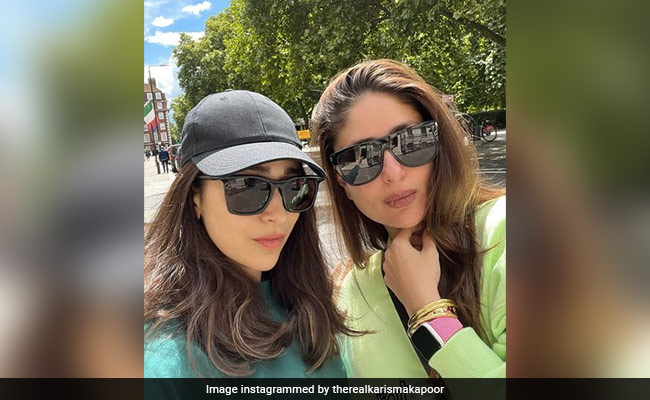 Kareena Kapoor, who has been holidaying in London for a while, "reunited" with sister Karisma Kapoor, a picture from which was shared by the actress on her Instagram profile. In the sun-kissed picture, the Kapoor sisters can be seen posing for the selfie. Kareena can be seen dressed in a green ensemble, while Karisma opted for a blue OOTD for her day out on the streets of London. Karisma Kapoor, sharing the picture on Instagram, wrote: "Reunited" and added the hashtag #sistersquad. The picture got a whole lot of love from the actress' Instafam.

This is what Karisma Kapoor posted:

A few days ago, Kareena Kapoor shared a picture of herself from an eatery in London and she wrote: "Waited two years for you baby Pret. Sipping my coffee. Coffee love."

The Kapoor sisters never fail to give us goals. On Karisma Kapoor's 48th birthday a few days ago, Kareena Kapoor shared this throwback picture and she wrote: "To the pride of our family.This is my most favourite picture of you. Aaj sab bolo. Happy birthday to our Lolo. Just the best sister ever."

Here's another picture of Kareena and Karisma with mom Babita.

In terms of films, Karisma Kapoor was last seen in the 2012 film Dangerous Ishhq, after which she featured in special roles in films such as Bombay Talkies and Zero. Karisma Kapoor's last project was ALTBalaji's web-series Mentalhood. She will soon star in a project titled Brown, which she announced on her Instagram profile earlier this year.