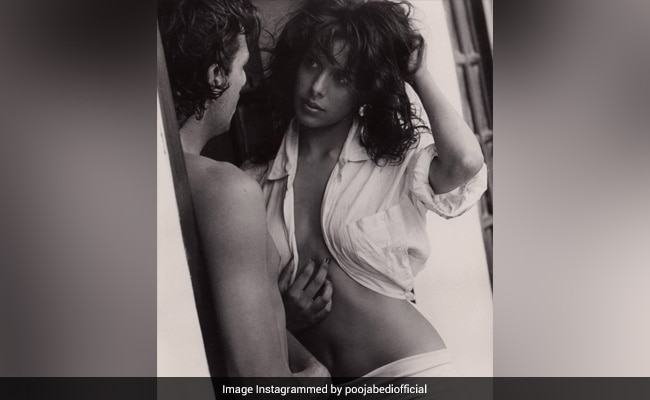 Pooja Bedi hit paydirt in her photo archive on Flashback Friday - stills from her controversial advert for Kamasutra condoms in 1991. For those not old enough to remember, Pooja Bedi and model Marc Robinson featured in a first-of-its-kind spot that instantly became controversial and was banned from airing on Doordarshan. Sharing a bunch of black and white photo from the shoot, Pooja Bedi wrote: "GOSH! Some of the WOW stills taken during my shoot for the Kamasutra Condoms advert in 1991 by the late Prabuddha Dasgupta." She also tagged Gautam Singhania in her post, Chairman and Managing Director of Raymond Limited, who launched the advert in 1991.

Here are some of Pooja Bedi's favourite shots from 1991:

The advert was the first to be made for a condom brand and was directed by Alyque Padamsee. Banned from Doordarshan, it was, however, aired on cable TV. Kamasutra - and its advert - has been credited with revolutionising the role of condoms in India.

In an interview with Times Of India sometime in 2011, Pooja Bedi opened up about being "surprised and apprehensive" with the way the advert was conceptualized: "We shot the ad in Goa. When I signed the ad, I was told I'll have to be in shower and Marc Robinson will be on this boat. I was fine doing all that. However when I reached the studio, I spotted Marc Robinson there. I asked what he was doing in the studio! That is when I got to know that the ad will also be showing him getting into the shower with me. I was told to use the hand shower on Marc! I was surprised and apprehensive although I was okay with it."

Adding to her story, Pooja Bedi said she refused to touch Marc Robinson for the advert: "After some time, I got even bigger shock when I was told to squeeze Marc's back! That is when I said, 'I am so not doing that.' I refused to touch Marc Robinson. Finally the hand that squeezes Marc's back towards the end of the ad was not mine but my makeup artist's! The hand just had to look as if it was mine. I however touched him in other ads that we did together."

The Kamasutra ad turned Pooja Bedi into the talk of the town. The same year, she made her debut in Vishkanya and appeared in a supporting role in Aamir Khan's Jo Jeeta Wohi Sikandar.

For Sara Ali Khan, A Lot Has Changed Since This Extreme Throwback. But One Thing Hasn't...