"Clearly Sairah Kabir is having the most fun on the '83 shoot," wrote Mini Mathur 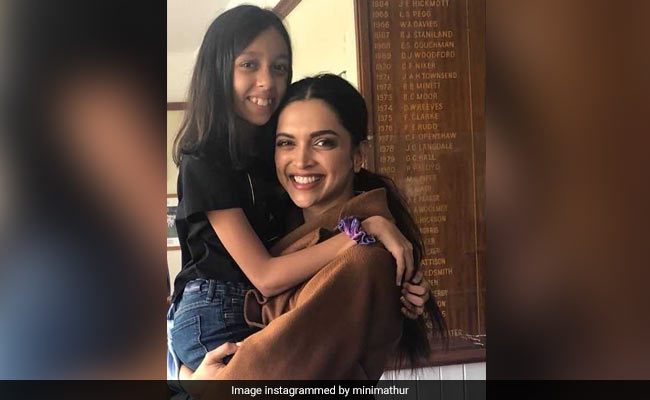 Can you guess who is having the time of her life on the sets of 83? It is none other than film's director Kabir Khan and Mini Mathur's daughter Sairah Kabir and why shouldn't she? She has the best company after all. In case you haven't figured out who we are hinting at, we are talking about Deepika Padukone. On Thursday, Sairah shared a super cute picture of herself along with the "Padmaavat" actress on her Instagram profile and she captioned it: "Having the time of my life on Kabir Khan's set. Also met Deepika Padukone." She added the hashtags "#83" and "#filmshoot" to the post. Later, Mini Mathur shared the same post on her Instagram profile and she captioned it: "Clearly Sairah Kabir is having the most fun on the '83 shoot and Deepika Padukone gave her some serious girl goals."

As of now, Deepika Padukone has not reacted to Mini or Sairah's post but we would love to see her response. Meanwhile, take a look at Mini Mathur's post here:

Clearly @sairahkabir is having the most fun on the #83 shoot !! And @deepikapadukone gave her some serious girl goals :) @kabirkhankk

Deepika Padukone announced her association with '83 last month by sharing a post on her Instagram profile. Deepika shared a picture of herself along with Ranveer Singh and Kabir Khan from the sets of '83 and she wrote: "And on to the next... Thank You Kabir Khan for this incredible honour." Deepika will be seen playing the role of Kapil Dev's wife Roma Dev in the film, while Ranveer will play the role of legendary cricket player Kapil Dev.

'83 is based on India's iconic win at the 1983 Cricket World Cup and it is slated to release on April 10 next year. Besides Ranveer and Deepika, the film also stars Pankaj Tripathi, Saqib Saleem, Amy Virk, Tahir Raj Bhasin, Harrdy Sandhu, Sahil Khattar among others.

Besides '83, Deepika will also be seen in Meghna Gulzar's Chhapaak, in which she will play the role of acid attack survivor Laxmi Agarwal.