'83: Ranveer Singh Is Thrilled That Deepika Padukone And He Won't 'Die In The End' 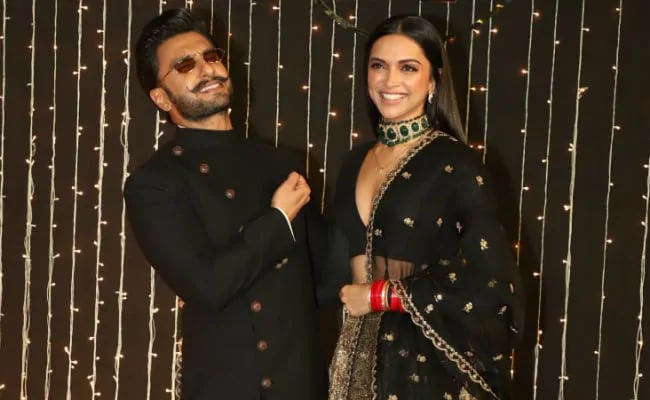 Deepika Padukone made her role in Ranveer Singh's '83 Instagram-official and nobody is more thrilled than her husband - not because he's going to be working with his wife (been there, done that) but for reasons of a long overdue happy ending. '83, a film on India's 1983 World Cup win, stars Ranveer as squad captain Kapil Dev; Deepika has a small role as Kapil Dev's wife Romi. And that's just why Ranveer Singh is so excited - excited enough to leave a comment on Deepika Padukone's post from Glasgow - where '83 is filming - thanking director Kabir Khan 'for this incredible honour.'

Ranveer Singh's comment pointed out why '83 will be special in the filmography he shares with Deepika Padukone: "And this time we don't die in the end. Yaaay!" Now, anyone who happens to be a fan of the couple's work would know that in all the films that Ranveer and Deepika have featured together, their characters come to a sticky end. '83 will be their first film that will not end in tragedy. 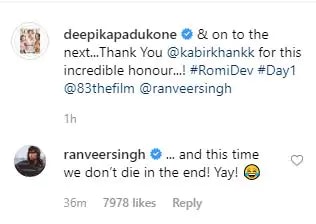 Now, an explanation for those who require one. Deepika Padukone and Ranveer Singh have made three films together, all directed by Sanjay Leela Bhansali. In 2013's Ram-Leela, they played desi versions of star-crossed lovers Romeo and Juliet; everyone knows how that turned out. Then came 2015's period dramaBajirao Mastani, in which both characters died - again. Only one person died in last year's "Padmaavat" - Deepika's character commits jauhar in the controversial film - but that didn't make it any less tragic. Adding insult to injury, Ranveer Singh, who made a cameo appearance as Deepika's groom in 2014 film Finding Fanny, chokes on cake and dies during his wedding party.

All in all, Ranveer Singh is quite right to be uber happy at the prospect of a death-free ending. He's also super thrilled that 'wifey is playing wifey,' as he wrote in the caption on one of his own Instagram posts.

'83 co-stars Saqib Saleem, Tahir Raj Bhasin and other young actors as Kapil's Devils and is expected to hit screens in April next year.