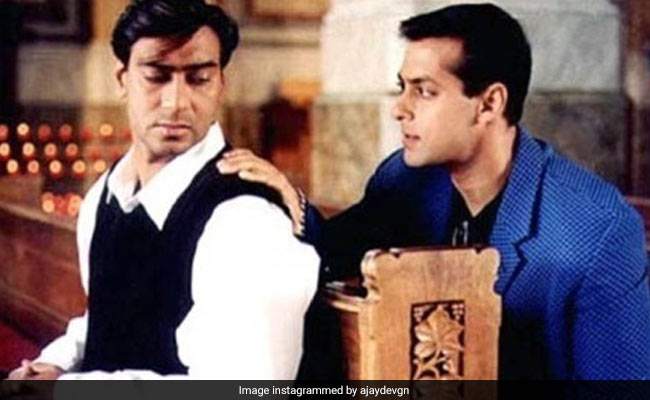 Sanjay Leela Bhansali's film Hum Dil De Chuke Sanam clocked 22 years on Friday. The iconic film featured Salman Khan, Ajay Devgn and Aishwarya Rai in lead roles. To mark 22 years of their film, Ajay Devgn and Salman Khan went down memory lane and shared throwback pictures from the sets of the film. Both the actors dedicated a social media post each to the 22nd anniversary of Hum Dil De Chuke Sanam. Ajay Devgn shared three throwback pictures on Instagram. The first picture features Ajay Devgn sitting with Sanjay Leela Bhansali. Another picture captures Salman Khan and Ajay Devgn, while the last one is a still from the film featuring Ajay and Aishwarya Rai. In the caption of the post, Ajay Devgn shared how the team always knew that they were "making a super-sensitive film," but they never knew that the film "would create history." Ajay wrote: "22 years of Hum Dil De Chuke Sanam; Salman, Sanjay, Ash and I knew we were making a super-sensitive film. Didn't think though that it would create history. Humbled."

Ajay Devgn's post received comments from many of his fans. Among others, actor Anil Kapoor commented and said that Hum Dil De Chuke Sanam is one of his "favourite films." Anil Kapoor wrote: "One of my most favourite films Ajay.. all of you'll were phenomenal."

Salman Khan, on other hand, shared a throwback picture of himself and Sanjay Leela Bhansali on Twitter. "Baees saal ho Gaye (It has been 22 years since Hum Dil De Chuke Sanam) #HumDilDeChukeSanam ko..... Ajay Devgn,#SanjayLeelaBhansali," Salman wrote along with the picture.

Directed by Sanjay Leela Bhansali, Hum Dil De Chuke Sanam was released in 1999. The film was adapted from the novel It Does Not Die by Maitreyi Devi. Even after 22 years of the release of the film, it continues to be one of most loved movies of Hindi cinema.