Tamil Nadu election results have given a second term to Chief Minister Jayalalithaa who met with a score of supporters before addressing a victory press conference. (AFP photo)

Chennai: For the first time in 32 years, Tamil Nadu has chosen to give a consecutive term to one party - Chief Minister J Jayalalithaa will remain exactly where she is.

There were "no words in the dictionary," Ms Jayalalithaa said to describe her gratitude to the people of the state. "I have no other interest in life except to work for the people of Tamil Nadu," the reclusive Chief Minister added.

Celebrations were raucous outside her home in Chennai today with supporters declaring victory by 9.30 am.

Most exit polls had predicted that the 67-year-old's arch rival, M Karunanidhi, and his DMK would return to power in a continuum of the "yo-yo trend" of which Tamil Nadu has been a long-time subscriber.

But as counting of votes accelerated, the leaders who were seen walking into Mr Karunanidhi's home refused to comment on camera, indicating an acceptance of defeat.

Mr Karunanidhi is 93, and in a wheelchair, but had committed to serving as Chief Minister if the DMK was elected, an announcement which caused considerable heartache for his son, MK Stalin and his considerable supporters. 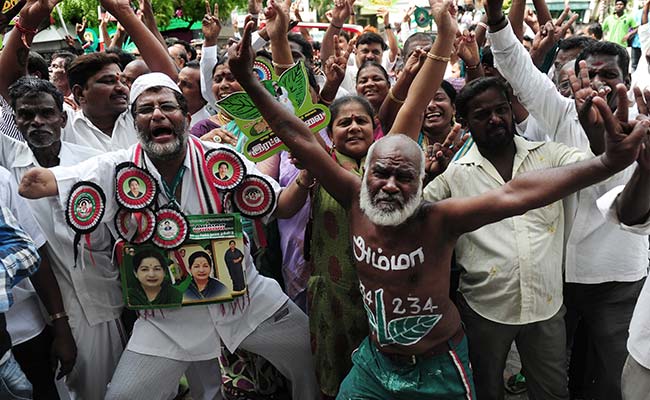 Celebrations in Chennai started as early as 9.30 in the morning after trends suggested a victory for Jayalalithaa.

Ahead of the election, Jayalalithaa promised to gift voters cellphones and other freebies - her last election campaign five years ago pledged mixer-grinders to housewives. Her Amma canteens, which provide highly subsidized food, have been a runaway success.
Last year, she was acquitted of corruption charges by a court in Bengaluru, but the Karnataka government has challenged that verdict in the Supreme Court.

Counting took place today in 232 of 234 constituencies in Tamil Nadu after polling was postponed in two constituencies - Aravakurichi and Thanjavur - due to reports of distribution of large amounts of money to buy votes.