CBSE board in a notification said the examinations have been cancelled and new dates for re-exams will be declared soon.

Prakash Javadekar addressed a press conference in Delhi about CBSE paper leak. He assured that the board will ensure that any incident of paper leak will be prevented in future. HE also said that the HRD Ministry has also commissioned an internal inquiry into the paper leak issue. He also said that strict action will be taken against those who are involved in the paper leak matter.

WATCH | "Parts of the paper were leaked on WhatsApp. We have deployed a special Delhi police team on the matter. We are sure that whoever has done this will be caught soon": @PrakashJavdekar on the #CBSE paper leak issue


In the notification, the board has said that the schedule for the re-examination will be released within a week.

CBSE had conducted Economics board exam on March 26, 2018. It was alleged that a hand written question paper had been doing rounds on the messaging service WhatsApp a day prior to the exam. On the date of the exam, teachers were stunned to find that the paper being circulated had same questions as in the actual question paper.

Students have been alleging paper leak since the board exams started on March 5. While, the board had denied allegations of any paper leak and had called it the work of miscreants, the decision for re-examination does affirm that there had been a lapse on part of the board to ensure a fair examination. 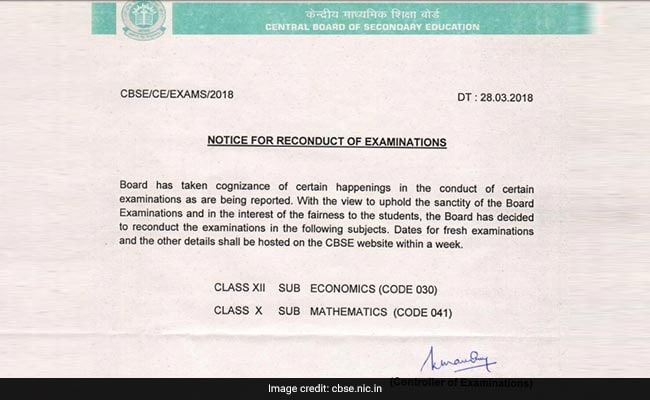 "With the view to uphold the sanctity of the Board Examinations and in the interest of the fairness to the students, the Board has decided to reconduct the examinations in the following subjects. Dates for fresh examinations and the other details shall be hosted on the CBSE website within a week," CBSE notification published on the official website said.

However, the board denied any allegation of paper leak and said that all the seals (of packed question papers) were found intact at all the exam centres.

"There has been no leakage of the question paper. All the seals (of packed question papers) have been found intact at all the exam centres," the Board said in its official statement.

"During the process of examination, however, at local level, some miscreants tried to play mischief by circulating messages through WhatsApp and other social media to disturb the sanctity of examinations," the CBSE had said then.

Commenting on the issue, Congress leader Shashi Tharoor said the CBSE leak is a disgrace and accountability is essential.

"Officials must be culpable, yet it is innocent students who will be punished," he tweeted.

The CBSE leak is a disgrace & accountability is essential. Officials must be culpable, yet it is innocent students who will be punished. Here is one student petition that has reached me https://t.co/g6zpHoZoAX


Anil Swarup IAS, Secretary, School Education and Literacy, HRD said the unfortunate leak of CBSE question papers has put a large number of students to inconvenience and it is a very serious matter, and is being inquired into. Strict action will be taken against those found guilty.

The unfortunate leak of CBSE question papers has put a large number of students to inconvenience. It is a very serious matter and is being inquired into Strict action will be taken against those found guilty. Statement has also been issued by CBSE pic.twitter.com/MfyoE4frfz

CBSE Class 10 Maths Re-Exam: Here Is What Students Should Know

JNU: Registration Process For Winter Semester Put On Hold Till May 16