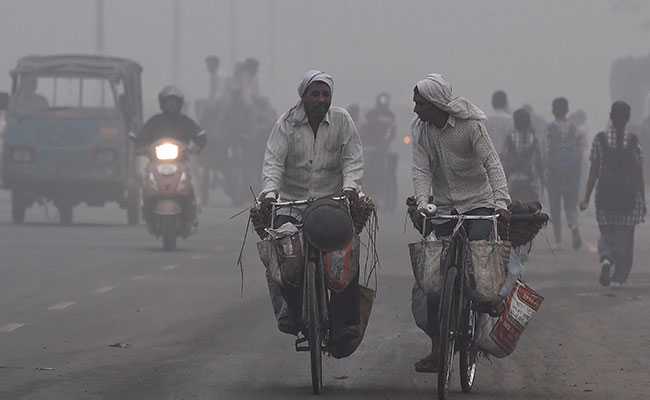 The common sources for air pollution as mentioned in the advisory include motor vehicles emissions.

New Delhi: As a toxic haze hanging over the national capital thickened, the Delhi government issued a health advisory today urging Delhiites to use carpooling and public transport, stay indoors, and not to smoke. It also urged people to avoid going for walk during early morning and late evening hours, and not to burn dry leaves, crops residues, wood, coal, etc.

The government also advised people to go to the nearest medical facility, if they feel breathlessness or palpitation.

Treatment is absolutely free in all the government health facilities.

"Keep the environment healthy, not only by words, but also by your actions. If you feel irritation in the throat and nose, take steam and do salt water gargles. Drink plenty of warm water and maintain good hydration.

"If any time you are feeling breathlessness or palpitation, immediately go to nearest medical facility. Do not smoke, as it harms not only you but others also," the advisory said.

The advisory advised schools to avoid outdoor assembly, sports activities and other physical activities in the early morning hours.

It called for extra precautions for high risk groups such as children, elderly, pregnant women, asthma patients, and those with COPD (Chronic Obstructive Pulmonary Obstructive Pulmonary Diseases), heart disease and stroke, diabetics, and with low immunity and suggested usage of N95 masks while going outdoor during peak pollution hours.

The advisory states that polluted air of the capital is taking a heavy toll on the health, and the national capital has been witnessing smoggy mornings due to high moisture content, particulate matter, pollution, and lack of winds.

Smog is a mixture of carbon monoxide, particulate matter, ground level ozone and oxides of nitrogen and sulfur dioxide.

"It is a man-made situation as we only have created such high levels of pollution. The haziness witnessed in morning hours is usually just smog, obstructing visibility.

"Smog is poisonous and may create many health hazards like it may trigger asthmatic attacks and other breathing complication," the advisory stated.

The common sources for air pollution as mentioned in the advisory include motor vehicles emissions, particularly diesel vehicles, industrial pollution, construction activities and road side dust, household combustion devices such as wood and coal among others,

It also could be result of bursting of firecrackers and burning of agricultural residue in Punjab, Uttar Pradesh, and Haryana.

A few minutes in polluted air can cause allergy, eye irritation, sore throat, cough, shortness of breath and difficulty in breathing along with headache, sleepiness, lowered alertness, nausea, vomiting and abdominal pain.

Promoted
Listen to the latest songs, only on JioSaavn.com
Over a period of time, it may lead to respiratory problems like asthma, bronchitis, emphysema, damage to lung tissues, poor lung function and lung cancer.