Farmers Tractor Rally: The protesters can take out the rally on the 63-km route near Singhu Border that divides Delhi and Haryana. Singh border is the epicentre of farmers' protest.

Thousands of farmers camping near Delhi borders against the three contentious agricultural laws have been allowed to hold the tractor rally - "Kisaan Parade" - on three routes in the national capital tomorrow. More than 3,000 volunteers will be on duty across the city as the tractor rally starts at 10 AM.

The protesters can take out the rally on the 63-km route near Singhu Border that divides Delhi and Haryana. The route that covers SGT Nagar, DTU Shahbad, Barwala, Auchandi Border ends at Kharkhoda Toll Plaza. Singhu Border has been the epicentre of the farmers' protest that began late November. 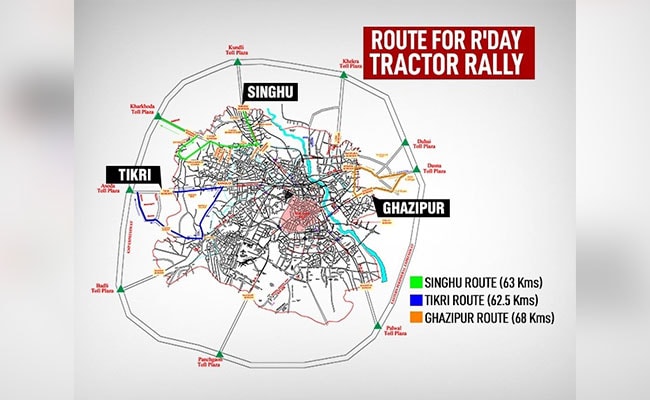 On Sunday, Delhi Police said that the protesters can enter the national capital but can't disturb the Republic Day parade at Rajpath. "There is a threat perception that Pakistan-based terrorist groups can create some trouble. Mischievous elements can create a law-and-order situation," Deependra Pathak, Special Commissioner of Police (Intelligence) said, adding that over 300 Twitter handles have been traced to Pakistan that have been created to disrupt and hijack the rally.

Speaking about how they plan to manage the crowds, Baldev Singh Sirsa, a farmer leader, told NDTV,  "Our preparations are in full swing. Tableaux from different states will be present. We had warned the government about huge crowds... it's the responsibility of the government to manage crowds. However, we have deployed volunteers, and we will make sure everything is done in an orderly manner."