Delhi Records Around 60% Overall Voter Turnout, Down Since 2014 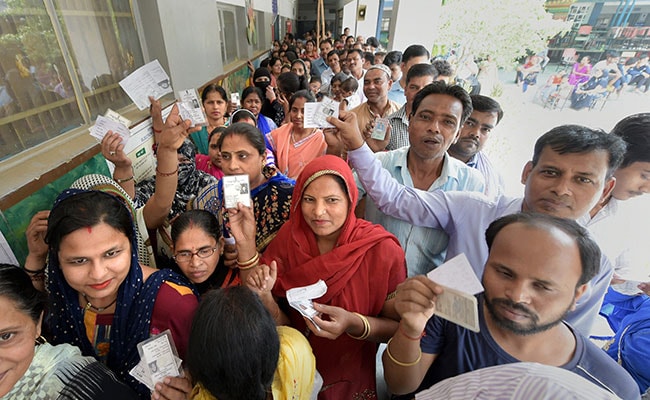 Delhi polls: Over 300 poll-related complaints were received by the Delhi Police Control Room.

Delhi recorded a voter turnout of 60 per cent on Sunday, down from 65 per cent in 2014, in a three-cornered Lok Sabha contest among the BJP, AAP and Congress, with instances of EVM glitches and missing voter names reported from various areas.

Of the seven seats in Delhi, which went to polls in the sixth and penultimate phase of the Lok Sabha elections, Chandni Chowk and North East Delhi constituencies recorded over 62 per cent turnout while New Delhi, known for its VVIP voters, saw a turnout of 56.5 per cent.

"There were queues outside polling station till 6 pm. Turnout is expected to cross 61 per cent by the end of the day" Mr Singh said.

Delhi has 1.43 crore voters and as many as 164 candidates were in the fray, including heavyweights like former chief minister Sheila Dikshit, Union minister Harsh Vardhan, Delhi BJP President Manoj Tiwari, ex-cricketer Gautam Gambhir and AAP's Atishi.

The BJP, Congress and AAP have all exuded confidence of winning all the seven seats.

Polling started at slow pace in the morning, but picked up as the day progressed.

Mr Naidu cast his vote after returning from a four-day trip to Vietnam.

From first-time voters to centenarians, there was enthusiasm across all age groups to exercise their franchise.

Despite rigorous Ramzan fast and scorching heat, Muslims turned out in large numbers.

Mr Singh said eight per cent of VVPATs were replaced during the day.

As many as 778 Voter Verifiable Paper Audit Trail Machines (VVPAT), 141 control unit and 228 ballot units were replaced during mock polls in morning.

During polling, 450 VVPATs, 61 control units and 77 ballot units were replaced.

Many voters were disappointed after finding their names missing from the voters list. F For instance, 68 year-old Mohammad Shokeen and 12 members of his family could not cast their votes due to the same reason.

A resident of South Delhi's Sangam Vihar, he was not alone to miss out on voting.

"This is not acceptable. We are the residents of this area. We have not changed residence and have all documents. Nobody came to our house to gave us slips. We have been voting for so many years," said Mohammad Shokeen.

Mr Singh said he and his office had been asking people to check their names in voter lists for the last six months.

"Several awareness campaigns were carried out. They should have checked names before going to vote. If their names were not there they should have filled form 6. We were accepting forms till April 13," Mr Singh said.

Over 60,000 security personnel, including Home Guard and paramilitary personnel, were deployed for peaceful conduct of polling in the city.

There were 523 polling locations that were identified as critical. There were no major reports of violence.

Raghav Chadha alleged that the BJP workers colluded with the police and were casting their ballots again and again after removing the ink.

More than 300 poll-related complaints were received by the Delhi Police Control Room.

Earlier in the day, after casting his vote, Congress president Rahul Gandhi hit out at Prime Minister Narendra Modi, saying he "used hatred" during the elections but the Congress "used love".

On his part, Chief Minister Arvind Kejriwal appealed to people to vote for those who have done work and not for those spreading "hatred" and "venom".

"Good morning Delhi. Please vote. Vote for those who have done your works. Don''t vote for those who are spreading hatred and venom and also stopping Delhi''s works. Your vote can change the country," Mr Kejriwal tweeted in Hindi.