Lok Sabha Elections 2019: Rahul Gandhi was surrounded by his bodyguards and the media as he walked to the voting centre on Aurangzeb Lane.

Election 2019 Phase 2: Rahul Gandhi walked from his home to the polling booth in New Delhi.

Rahul Gandhi ditched his high-security vehicle and instead, chose to walk down from his home in central Delhi to the polling booth to cast his vote in the sixth round of the national election. The Congress president is a voter in the high-profile New Delhi parliamentary seat.

"It was a good fight. Narendra Modi used hatred and I used love. And I think love will triumph. The people are our maalik (boss). We will accept the people's mandate," Mr Gandhi told reporters after voting.

Rahul Gandhi was surrounded by his bodyguards and the media as he walked briskly to the voting centre on Aurangzeb Lane, not far from his Tughlaq Lane home.

Ajay Maken, who is the Congress candidate from the New Delhi seat, accompanied Mr Gandhi. 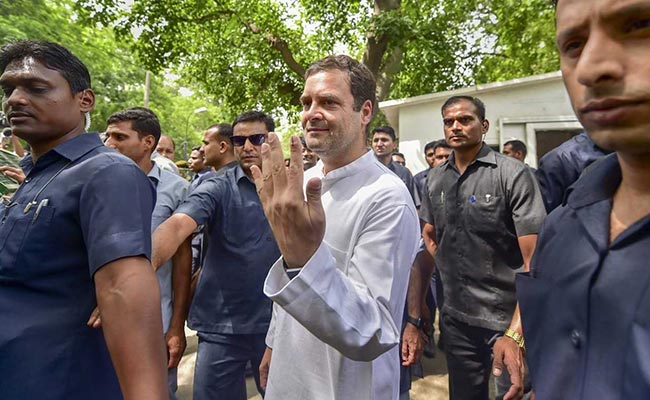 "There are four issues in this election, these are not our issues but people's issues. And the most important among these is of unemployment. Then, condition of farmers, demonetisation, Gabbar Singh Tax (mocking GST), corruption and the Rafale issue," Mr Gandhi said.

All seven seats of Delhi are voting in the penultimate round of the seven-phase Lok Sabha election. Poll pundits say in the New Delhi parliamentary seat, it is a straight fight between sitting lawmaker Meenakshi Lekhi of the BJP and Ajay Maken. Brijesh Goyal is the Aam Aadmi Party candidate in New Delhi.

Rahul Gandhi contested from two constituencies this election - the family stronghold of Amethi in Uttar Pradesh and Wayanad in Kerala.

Challenging him in Amethi is Union Minister Smriti Irani of the BJP who, despite her defeat from the seat in 2014, has frequently visited the area. Ms Irani claimed that the prospect of defeat from Amethi has pushed Mr Gandhi to contest from Wayanad.