Delhi Chief Electoral Officer Ranbir Singh said he and his office had been telling people to check their names in voter lists from the last six months. 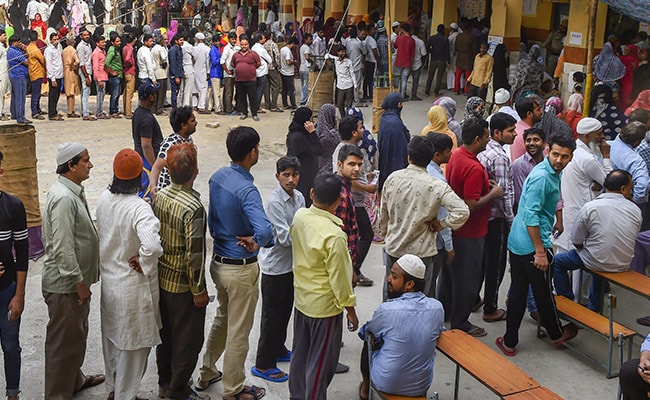 Over 1.43 crore people in Delhi are eligible to vote in this election

Mohammad Shokeen and twelve members of his family could not cast their votes on Sunday as their names were missing from voter's list despite the fact they have been living at same address in Delhi for 32 years.

The 68-year-old, who lives with his family in South Delhi's Sangam Vihar D Block, is not alone, but there are many people like them who could not exercise their franchise in this Lok Sabha election.

"This is not acceptable. We are the original residents of this area. We have not changed residence and have all documents. Nobody came to our house to give us slips. We have been voting for so many years," said a furious Shokeen.

Delhi Chief Electoral Officer Ranbir Singh said he and his office had been telling people to check their names in voter lists from the last six months.

"Several awareness campaigns were there. They should have checked names before going to vote. If their names were not there they should have filled form 6. We were accepting forms till April 13," Mr Singh said.

Sanjay Kumar, 39, a resident of Tughlaqabad Extension who works in a private company, also said that he could not vote.

"This is disgusting. I have my own house here and have been living since my birth, I have an Aadhar card, ration card, pan card and other all documents. I have been waiting for the last three hours, but my name is not there. I don''t know whom to approach now," Sanjay Kumar said.

The ruling Aam Aadmi Party has been alleging that lakhs of names of voters have been deleted, even as poll body rejected its allegations.

"I came to vote early morning and waited for two hours while they tried to locate my name. I have been voting here for four decades and despite that my name was missing from the list," said 66-year-old Ranbir Anand, who is a retired government employee living in New Delhi.

"Three of my family members could not vote as their names were not there. They had to go back," the 32-year-old cloth trader said.

Hardik Sharma, a first-time voter, was disappointed that he could not take a selfie with his inked finger as his name was missing the voter''s list despite appearing in the voters'' list online.

"I do not know what happened. I do not know if I will be allowed to vote. The prime minister stresses that first-timers should vote in large numbers, but you have seen the situation yourself," Sharma, a resident of Janakpuri, said.

Taking to Twitter, Delhi Transport Minister Kailash Gahlot said, "Voters unable to find their votes at polling booths. It is true that on large scale votes have been deleted. All these are resident of Jai Vihar I, Najafgarh."

He asked what the ECI had to say about this and sought to know who was responsible for the voters' constitutional right to be taken away like this.

"Vote deleted this time. All are regularly voting in the past." Delhi Home Minister Satyendar Jain tweeted with images of voter identity cards of people whose names were not in the list.

Over 1.43 crore people in Delhi are eligible to vote in this election which will decide the fate of 164 candidates, of which 18 are women. There are 43 independent candidates.