Calling the Chief Minister's allegations against him as "malicious, deliberate and defamatory", Vijender Gupta has sought Rs 1 crore and the cost of litigation in the case as damages. 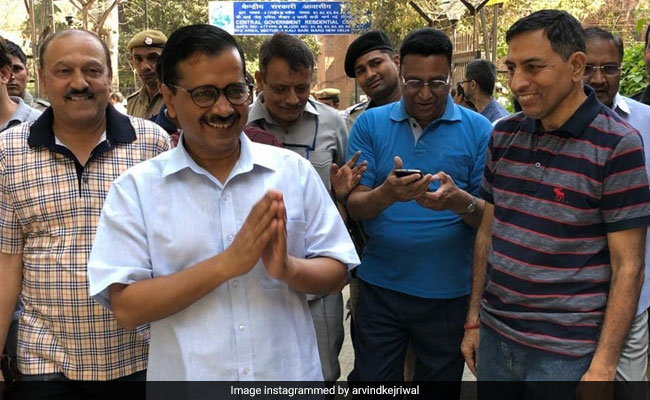 A Delhi court on Thursday agreed to hear a defamation case filed by BJP leader Vijender Gupta against Delhi Chief Minister Arvind Kejriwal and Deputy Chief Minister Manish Sisodia after the two leaders accused him of scripting the slapping of Mr Kejriwal during a road show on May 4.

Calling the Chief Minister's allegations against him as "malicious, deliberate and defamatory", Mr Gupta has sought Rs 1 crore and the cost of litigation in the case as damages.

In his plea, Mr Gupta said: "The accused 1 (Kejriwal) himself planned getting slapped during a road-show on May 4 and blamed the BJP for the incident in order to make political gains."

"It was revealed that the accused no. 1 (Kejriwal) himself asked his liaison officer to remove the security personnel from his vehicle," his plea read.

Mr Gupta has requested the court to take cognisance of the offence under Section 499/500 (defamation) of the Indian Penal Code (IPC) and prosecute and punish the two Aam Aadmi Party (AAP) leaders in accordance with the provisions of law.

Mr Gupta's advocate told the court that the Chief Minister's allegation that his client was attempting to kill him was "malicious, deliberate and defamatory".

"These allegations are not only awful and disquieting, but also distressing and defaming. The complainant can't even think of hurting someone knowingly and voluntarily much less planning to assassinate/kill/murder the accused no. 1 (Kejriwal)," the advocate said.

He claimed that the AAP leaders made the statements on the social media, where they both have millions of followers, so that it reached people in and outside Delhi.

"Being a sensational charge, it was picked up both by the print and electronic media and widely circulated by media houses, thereby gravely impairing my reputation for which accused no. 01 (Kejriwal) and 02 (Sisodia) are responsible," Mr Gupta said in his petition.

He added that two leaders were also circulating the claim that the BJP was after Kejriwal's life. "There are newspapers articles in which accused no. 01 is claiming that he will be assassinated like former Prime Minister Indira Gandhi was by his personal security officer," read the complaint.

Mr Gupta said that the allegations were made with the "ulterior motive to degrade his reputation, to malign his image and gain cheap political mileage in the Lok Sabha elections."