"I request the central government to bring an ordinance to stop the sealing drive," Satyender Jain said. 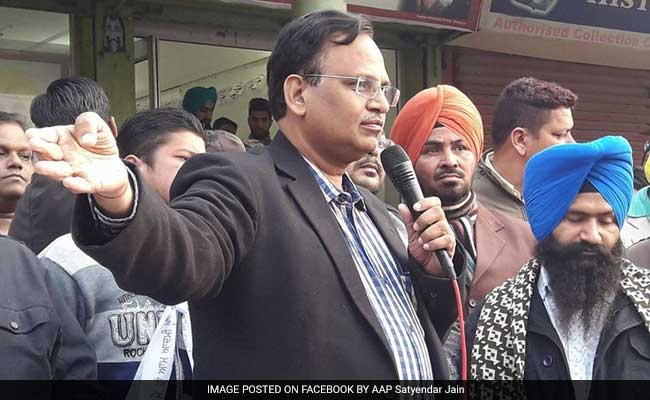 Satyender Jain asked the government to also find a solution to the problem of encroachments. (File)

Delhi Urban Development Minister Satyendar Jain has requested the Centre to bring in an ordinance to stop the ongoing sealing drive and also find out a solution to the problem of encroachments on city roads.

Participating in a discussion on the sealing issue in Delhi assembly, Mr Jain slammed the Delhi Development Authority (DDA) and BJP-led municipal corporations, saying encroachment is the main problem, but the sealing drive is being carried to "only make money" and trouble the traders.

"I request the central government to bring an ordinance to stop the sealing drive and also find out a solution to the encroachments on roads," the AAP leader said.

Mr Jain also claimed that conversion charges, being taken from traders to provide relief from sealing, are just to "make money".

Earlier, AAP MLAs Rituraj Govind, Nitin Tyagi and Saurabh Bharadwaj initiated a short discussion on 'problems being faced by Delhi residents due to sealing of commercial properties and urgent need for suitable legislation by the Parliament to provide relief".

The sealing drive, which has been underway on the directions of the Supreme Court-appointed monitoring committee, has assumed political overtones in Delhi with the 2019 Lok Sabha and the 2020 Assembly polls drawing nearer.

Over 2,200 kilometres of streets and footpaths have been encroached upon in the national capital, whose length is almost like travelling from here to Kanyakumari, the Supreme Court had said in September last, observing it reflected the magnitude of the problem.

The top court in July also had directed that there would be "no stopping of sealing or demolition" of unauthorised constructions in Delhi after the Centre had said it had not given any instructions to the civic bodies to go slow or stop the sealing drive against offending structures.